"If ethnic armed groups do not see the civilian government body as genuinely embracing federalism, there is a risk of abandoning the effort to topple the Tatmadaw,”  -Michael Martin, US-based Asian Affairs expert.

In early February, before the violent military crackdown began in Myanmar, some young ethnic activists claimed there was little or no difference for ethnic people, in living under the rule of the military, or the civilian government led by Aung San Suu Kyi's National League for Democracy (NLD).

But in the last 100 days, the military has tightened its grip on the country, killing hundreds of civilians, and prompting the mobilization of ethnic armed organizations which are now openly discussing a violent and coordinated challenge to the Generals.

In mid-April, the National Unity Government (NUG) was formed by ousted NLD politicians, prominent protest leaders, and ethnic representatives, as a body claiming to be a legitimate government of the country. Now the voices grow stronger among those convinced their civilian representatives, many in hiding or exile, have really done all they can, and an armed struggle may be the only way to solve the current impasse.

“Now, we need a field leader who is able to implement words into action -we need to do a check-list before we launch the armed struggle to abolish the State Administration Council (SAC)“, says Tun Aung, a leader of the EU Action Group in Myanmar, just one of a number of protest groups.

Myanmar’s civilian NUG says it will not negotiate with the military regime against the will of the people, despite calls from the Association of Southeast Asian Nations (ASEAN) for talks. ASEAN held a summit meeting in April with the General who instigated the coup - Aung San Hlang.

Southeast Asian leaders demanded he order an immediate end to killings and the release of political detainees in Myanmar.

During the meeting in Jakarta, the General was also told a dialogue between contending parties in Myanmar should immediately start, with the help of ASEAN envoys.

“The situation in Myanmar is unacceptable and should not continue. Violence must be stopped, democracy, stability and peace in Myanmar must be returned immediately,” Indonesian President Joko Widodo said during the meeting. “The interests of the people of Myanmar must always be the priority.”

The NUG blames the military regime as the perpetrator of the violence sweeping Myanmar, but at the same time, it has had issues in coordinating with Myanmar's major ethnic armed organizations (EAOs).

Although it has openly endorsed the new concept of a federal Myanmar, with individual states running much of their own affairs, many leaders of ethnic armed groups have expressed distrust toward the NUG, recalling the ultimately disappointing tenure of Aung San Suu Kyi,  who failed to keep her promised commitments to ethnic groups.

As the number of protesters and bystanders gunned down in Myanmar draws closer to 1000, the protesters remain unbowed by the military junta. As the international community struggles to find an appropriate way to apply pressure on the junta, some members of the pro-democracy movement are preparing for a full-scale military campaign against the Burmese Army.

The Tatmadaw has belatedly realised the people of Myanmar will not bow down to dictatorship as they have in the past,  and the failure to quell the protest movements in the urban cities has boosted the spirits of those in the countryside and distant provinces, where more and more people are reportedly joining the ethnic armed organizations.

“Actually the military is in its weakest state in history”, claims Htoo Maung, a 24-year-old protester from Yangon. “Despite being armed with assault rifles and grenades, a lot of soldiers died when attacking protesters in Kalay, Mindat and elsewhere."

"At the same time, the protesters are using only homemade hunting guns to defend themselves, and are outnumbered by security forces,” he says. The Myanmar military is reported to have some 400,000 active armed personnel, but the numbers are highly debatable as they are used to make the regime look stronger than it is.

Generals in the Tatmadaw are directly rewarded for their performance, and defecting soldiers are not reported to the upper levels.

The issue of defections has become a key factor in recent weeks, with increasing numbers of officers defecting to ethnic forces, or the urban protest groups.

“Clearly they lack good training, that’s why they have so many casualties," says Htoo Maung.

"People do not expect the UN or the West to directly intervene anymore, and many young people have left cities and towns of central Myanmar to undergo military training with the ethnic armies" he adds.

While ethnic groups have conducted running conflicts with the Tatmadaw for decades, the pressure the coup has put on the rank and file appears to have weakened it, and the list of successes of ethnic armed groups seems to be growing at a fast pace.

On May 3rd, the Kachin Independence Army (KIA) announced that it had shot down a government helicopter during heavy fighting. It earlier captured a military base from the Tatmadaw in the northernmost part of the country.

The Karen National Union (KNU), has also been involved in heavy fighting near the densely forested border with Thailand, destroying an army post.

Since the coup, they have joined other ethnic groups in scrapping a military truce with the Tatmadaw, and are continuing the fight for self-determination for about 1.6 million Karen people.

“I am afraid to be killed, but I need to protect my country”, says Gum Tung, a young ethnic Kachin man, who recently came back from China, following the reports of killings by soldiers in the capital of Myanmar’s northernmost Kachin state.

He is not permitted to disclose any details about his training camp. “I am still waiting for the training to start,” he adds.

As the preparations for armed conflict continue in parts of the country, the new National Unity Government does not have any territory to control, and the pro-democracy movement seems stuck in protest mode.

After the coup, the military invited ethnic leaders to join their government, but they mostly declined, aware that the public overwhelmingly opposes the slide into the dictatorship.

Despite being often dissatisfied with the performance of Aung San Suu Kyi, most ethnic leaders have called for the restoration of democracy and condemned the violent attacks on civilian protesters.

The army shows no sign of easing its campaign though, believing it is fighting to maintain Myanmar as a nation against those who would destroy it. In this fight, there are no holds barred.

According to Michael Martin, Asian affairs expert at the Congressional Research Service in Washington,  “In the Tatmadaw's campaign strategy dubbed "4-cuts" (no people, no food, no supply, no territorial resources), there is limited differentiation between civilians and armed combatants [in ethnic areas]. "

Levels of violence have increased in response to the threats the army faces. "What we see now, with artillery bombing ethnic villages, and air raids [...] is not the same as killing Bamars in Yangon," he says.

Hunter S. Marstan from Australian National University argues that “a federal army - or even the uncoordinated outbreak of violence on multiple fronts across the country - would certainly represent a major new challenge for the military”.

“[Myanmar’s military] has for decades relied on divide-and-rule tactics – signing ceasefires with certain groups while waging war against others, and vice-versa – to sustain their warfighting capacity," he explains. To what extent ethnic armed groups can oppose or defeat the regime in a military conflict is open to debate.

Marstan argues that “there is legitimacy in the idea that [they] might fight outside of their traditional territories. The Karen National Organization (KNU) got very close to Yangon shortly after WWII and nearly toppled the newly formed government. “

Htoo Maung is one of those who sees the Tatmadaw as weakened by the scale of the protests and the renewed activities of the armed ethnic groups.

"Soldiers are instilled by their commanders with the fear of getting killed, and [that is] the only glue that sticks the military together,” says Htoo Maung.

"I'm hoping the losses the Tatmadaw are taking will lead to higher rates of defections, especially among the officers," he says.

The Tatmadaw has upgraded its inventory of armoured vehicles in recent years, but to the astonishment of many observers, the army's more sophisticated weaponry was not deployed in the 2020 conflict in the Rakhine State with the Arakan Army.

Despite the military power imbalance, the generals chose to sign a peace deal with the Arakan Army (AA), as well as remove it from the list of terrorist organizations.

The Arakan Army at the time had not voiced support for the protesters and only a few protests have been reported in Rakhine State, which came to global attention in 2017 when the military launched a brutal crackdown on the state’s Muslim Rohingya community, forcing hundreds of thousands of people into neighbouring Bangladesh.

It can be argued that Tatmadaw realises that their base of support is not that broad, and they knew taking the Arakan Army off the list of military opponents would allow them to focus on the protests in the major cities and towns.

It is ironic that it required a coup d’etat for the cause of ethnic people across Myanmar to get attention from the majority Bamar people, who make up many of the protest groups in Yangon and elsewhere.

Whether the ethnic armed groups can coalesce with the urban protestors to oppose the Tatmadaw in an armed conflict is yet to be seen.

But on the sidelines, organisations like ASEAN, the UN, and others are involved in high-level discussions with the Generals, in the hope that a negotiated agreement of some kind can be signed - allowing the Tatmadaw an escape route from their current situation, and allowing badly needed humanitarian aid into the country.

For any peace to be had, the killing of civilians must be stopped, and the Burmese Army must remove itself from national politics forever. 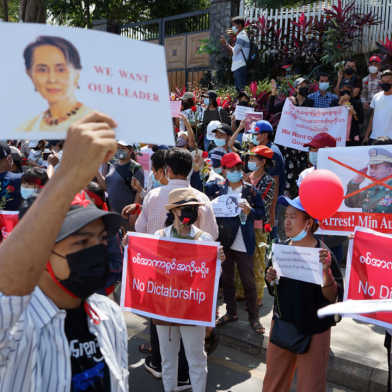 Opinion & Analysis
ThefuturelandscapeofMyanmarpolitics
The February 1 coup in Myanmar has thrown a lot of uncertainty onto the country’s future. So, what's next? More >
by Stan Jagger 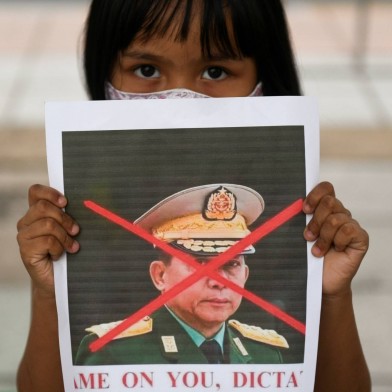 Opinion & Analysis
Myanmar:TheStudentVoice
As the military crackdown rolls on in Myanmar, NZ-based students discuss the concerns for the future of their country. More >
by Graeme Acton