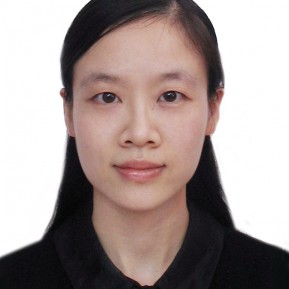 Political scientist Dr Lifang Peng examines Taiwan's democratic system and a potential solution to the power imbalance between the five branches of government.

This is the second piece in a two-part series by Dr Peng on Taiwan. The first part reflected on President Lee Teng-hui and how he was viewed.

Many Taiwanese agree that Lee Teng-hui (李登輝1923-2020) has contributed to Taiwan’s democratisation.

However, Lee’s government significantly amended the 1946 Constitution of the Republic of China (ROC), causing a power imbalance among the five branches of government.

This imbalance is an important factor accounting for Taiwan’s rambunctious democracy.

I argue that a way out of the predicament is to uphold the principle of equilibrium to deal with the relationships among different branches.

Chief architect of the Constitution, Carsun Chang (張君勱1887-1969), adopted this principle and his constitutional thought shows a possible solution to the problems faced in Taiwan’s democratic system. 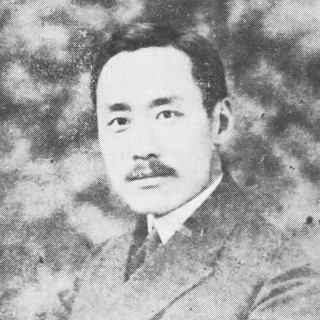 Father of the Constitution of the ROC

Carsun Chang, known as the Father of the Constitution of the ROC, was an expert in constitutional law, and key figure of the China Democratic League outside the KMT and the Chinese Communist Party (CCP) in Republican China (1912-1949).

While drafting the Constitution Chang followed the Confucian doctrine of equilibrium and tried to meet the demands of all parties without compromising the principle of constitutional democracy.

To the satisfaction of most, he successfully adapted Western political ideas to Chinese conditions and reconciled Sun Yat-sen’s theory of democracy with Western constitutional law, liberalism with socialism, and parliamentarianism with presidentialism.

Although the bulk of this constitution was approved by all parties, there was no chance to implement it.The CCP and the KMT finally resorted to force rather than political negotiations.

After defeating the KMT, the CCP abandoned the Constitution. Neither did the KMT enforce this constitution immediately in Taiwan.

Chang decided to live in exile in America to show his disapproval of both parties. 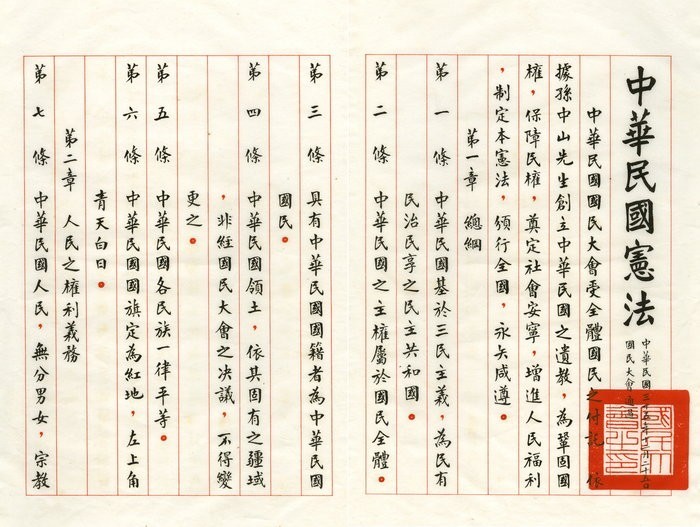 Constitution of the Republic of China (1946)

The Constitution of the Republic of China

This constitution provided for a new type of democracy—a semi-presidential system with a mixed economy combining capitalism and socialism.

It distinguished itself from major Western democracies by creating a five-power government, rather than a three-power one: the executive, the legislature, the judiciary, the control branch, and the examination branch.

The five–power government was derived from Sun Yat-sen’s theory of democracy.

The control system (監察制度) and the examination system (考試制度) have their origins in the traditional Chinese government.

Many of the powers exercised by the control branch, such as impeachment and auditing, are similar to those of the legislature and the ombudsman system in Western democracies.

In the history of Chinese constitutional law, the 1946 Constitution is of great importance.

It was the outcome of negotiations among different political parties of the time and provided for a new type of democracy based on Chinese conditions.

The Constitution has never been implemented by a Taiwan government.

There have been significant amendments to the Constitutionsince since Lee was elected President. He amended it not because it was not democratic but because he saw it as not suitable for Taiwan—Taiwan needed its own constitution.

Lee preferred a three-power government with a powerful executive branch, so he could carry out political reforms the way he wanted.

The Constitution has been amended seven times so far: Lee’s government amended it six times between 1991 and 2000, shaping Taiwan’s current democratic system.

One change the amendments make is that all eligible Taiwanese voters can directly elect their president.

According to the original constitution, the president was indirectly elected by the National Assembly, similar to the Electoral College.

Many Taiwanese think this is a good change. However, some political scientists argue that whether a government is democratic or not is not determined by the way a leader is elected. The American President, Prime Ministers of Japan and the UK, for example, have never been directly elected.

Other changes have produced more problems than benefits and there is a lack of equilibrium between the executive branch and the control branch.

Taiwan’s executive branch consists of the president and the Executive Yuan led by a presidentially appointed official.

By contrast, the power of the control branch has decreased and it has lost its independence, and powers of consent and impeachment.

Previously, members of the control branch were elected by local councils. Since the constitution was amended, they have been appointed by the president with the consent of the legislature.

The imbalance between the executive and control branches has caused continuous disputes between the DPP and the KMT.A dispute occurs whenever a party alternation takes place. They cannot agree upon the president’s nomination of individual politicians to the control branch that should be an independent government watchdog.

In June and July 2020, two fights between the DPP and the KMT occurred. The opposition party KMT occupied the parliament to oppose Tsai Ing-Wen who nominated members of her own party (DPP) to the Control Yuan.

Other opposition parties disagree with Tsai, but they can do nothing to change the DPP’s decision. The DPP wins most seats of the parliament, so Tsai’s nomination will be approved.

When commenting on the current constitution of the ROC in 2017, Hu Fu 胡佛 (1932-2018), a prominent legal scholar articulated that the constitutional amendments created an autocratic president and spoilt the principle of checks and balances based on which the 1946 Constitution was drafted.

The Constitution of the ROC: What Next?

However, abolishing it cannot solve the problem of a lack of equilibrium among the five government branches. The president remains powerful. It is still difficult to impeach them and the president has the power to appoint individuals they like to the Executive Yuan and the Judiciary Yuan.

They usually belong to the party that wins the most parliamentary seats, so Taiwan’s government is controlled by the ruling party and its leader. What’s more, a new question arises: which branch exercises powers of censure, auditing, and impeachment?

If the principle of checks and balances is to be observed, an amendment should seek to check the powers of the president and the dominant party.

When Chang drafted the Constitution, he did not design a presidential system. The Chinese government in his time tended to have a powerful president leading the ruling party.

He objected to the establishment of a presidential system in China but the ruling party (KMT) insisted on it. To meet the demands of all parties and make a democratic constitution acceptable to the KMT, Chang reconciled presidentialism with parliamentarianism and devised a semi-presidential system.

A principle that Chang used to draft the Constitution is equilibrium.

This is the very thing missing in the current Taiwanese government. Taiwan will remain a rambunctious democracy if a three-power government fails to uphold the principle of equilibrium or checks and balances.

Where should Taiwan’s constitutional democracy go?

Any attempt to amend the constitution should stick to the principle of equilibrium, given the political culture and power struggles between two major parties in Taiwan.

To have an independent control branch checking presidential power and the power of the dominant party is vital to establishing a good and healthy democratic system in Taiwan. 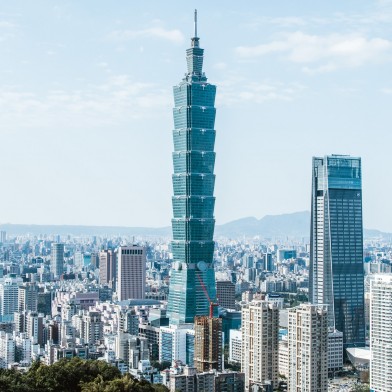