There’s always a big smile on Joseph Yamamoto’s face when baseball comes up.

The 13-year-old pitcher only started playing three years ago, but since then he’s played in New Zealand’s under 15 team for the Oceania World Cup Qualifier in Guam earlier this year.

“Joseph’s got this dream of being a professional baseball player,” dad Anthony Nepia said, “And his school’s really good in that they don't want kids to burn out.” 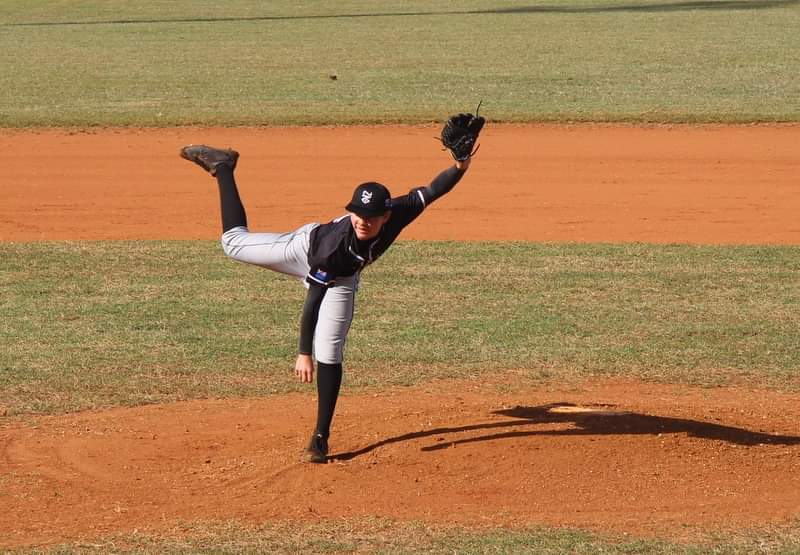 Joseph at the Oceania World Cup Qualifier, playing for the New Zealand U15 team earlier this year in Guam.

Joseph and his younger sister Emily were born in Japan, but have strong roots in New Zealand and identify as Japanese, Māori, and Kiwi.

The family spends most of their time in Japan, but to stay connected to New Zealand, they come back to Auckland for a month at the start of each year, where the siblings have attended Hillsborough Primary and Waikowhai Intermediate.

It was in New Zealand that Joseph first tried his hand at baseball – three years ago when he played a few games for the Central City under-11 team.

When he returned to Japan, he knew he wanted to keep playing. His parents, Anthony and Mami, warned him it would be a hard slog, as baseball in Japan can seem like a whole other ball game. Joseph in his Takeda Junior High School uniform and some of his baseball gear.

Stadiums with 30,000 seats can get packed out for games and at Joseph’s school,the senior team has around 100 players on the bench, for a nine-person game.

Joseph joined the junior team at his school – the Zebra Juniors – and follows a strict training schedule.

“There’s lots of stretching and dashing. Hill sprints too. And the medicine ball at home.”

He also plays golf and swims to stay on form.

COVID-19 hasn’t put a hold on training either. Joseph’s family left New Zealand on March 26, going from one lockdown to another in Japan, where he’s been mostly studying from home.

While he’s been unable to leave the house for baseball practice, his coaches have been in touch with him daily to make sure he’s continuing his training regime. Features
NZ-Japanties:5thingstoknow
Japan: it's the home of Sony, sushi and Toyota. But New Zealand's relationship with Japan goes much further than a love of Japanese tech, food and cars. More >
by

Features
SportsopportunitiesforKiwisinAsia
Top Kiwi athletes and coaches are increasingly looking to Asia in a bid to find the next big break in their careers, Siobhan Downes reports. More >
by Siobhan Downes