China’s influence on domestic politics in Australia and New Zealand emerged in 2017 as one of the most contentious foreign affairs issues in both countries.

In 2022, all eyes are on China's activities in the South Pacific.

The Asia Media Centre has collated major reports, articles and columns on the topic, highlighting how the issue has been covered in New Zealand media while Wang Yi, China's Foreign Minister, was in the Pacific making deals.

This page is not exhaustive; it aims to give a snapshot of coverage and of key voices involved in this week's discussions.

They key coverage for June 2022 is as follows. 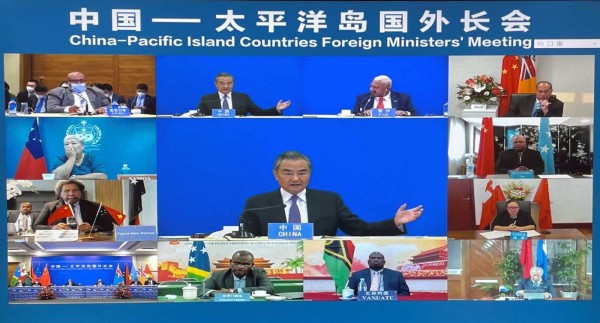 During Fiamē Naomi Mataʻafa’s first diplomatic trip to New Zealand since being elected, the Sāmoan Prime Minister made time to sit down with Moana Maniapoto of Māori Television’s Te Ao with Moana. They talked about last year’s constitutional crisis, the country’s relationship with China, and the future of female representation in Sāmoan politics.

New Zealand Minister of Defence Peeni Henare says Pacific island nations have the freedom to make their own decisions about cooperation with China, as Beijing seeks closer military ties with the strategically important region.

RNZ - Al Gillespie: China's influence in the Pacific not all bad

Professor Al Gillespie, professor of international law and author of The History of the Laws of War, joins RNZ's Sunday Morning to talk about the ongoing battle for influence in the Pacific and the positive impact China could have on the economy and society of Pacific nations.

New Zealand Herald/Newstalk ZB - Should New Zealand be concerned by China's interest in the Pacific?

In this podcast, Newstalk ZB chief political reporter Jason Walls joins Damien from Washington DC to discuss what, if anything, New Zealand can do about the "dragon at our doorstep".

Newstalk ZB -  Prof Anne-Marie Brady: We should be very wary of any moves China is making

With China working its way around our Pacific Island neighbours, and three islands already signing deals, Newstalk ZB Canterbury Mornings spoke to China specialist Professor Anne-Marie Brady about what it means for us.

In this television piece, while "what we have heard so far is the narratives from the big powers", University of Canterbury's Professor Steven Ratuva says "we really have not heard the voices of the Pacific states".

Newstalk ZB - Winston Peters: "Mahuta is too busy trying to get Māori to take over New Zealand"

RNZ - China's diplomatic push in the pacific continues in Tonga

Democracy Project international analyst Geoffrey Miller spoke to Corin Dann about the addition of Tonga to the mix.

One News - Presence of China, US in Pacific 'reality' of region - Robertson

Today FM - 'The Chinese are very persistent in terms of diplomacy, I should imagine they will be back'

Professor Robert Patman of the University of Otago discusses the "secretive" way in which China has been conducting talks with Pacific nations. In another piece on Today FM, Gerry Brownlee chimes in.

E-tangata - Time for a dramatic attitude change on the Pacific

China’s recent activities in the Pacific region — and the overreaction from some western nations — have seen discussions of Pacific Island countries that are increasingly patronising, framing them as vulnerable, and omitting their agency, writes Professor Steven Ratuva, the director of the Macmillan Brown Centre for Pacific Studies at Canterbury University.

Penny Wong, Australia's new foreign minister, has spent a fair time travelling between different Pacific nations to strengthen relationships in the region. She has had some wins with Fiji, Samoa and Tonga but has a hard road ahead of her.

The Guardian - New Zealand must engage in Pacific with humility, not entitlement

The row over the Solomon Islands’ proposed deal with China has exposed the toxic legacy of New Zealand’s past colonial incompetence, writes Morgan Godfrey for The Guardian.

In an interview with Newsroom, Minister of Foreign Affaris Nanaia Mahuta talks about the China-Pacific issue but says regional security and what caused the controversial deal with a superpower won't be debated until July's Pacific Islands Forum.

Not for the first time NZ is competing for the affections of the Pacific as China cements its influence. Experts say it’s a critical time for diplomacy, writes Kevin Norquay.

Former West Coaster Warrick Cleine lives in Vietnam and is a member of KPMG’s Global Council and Asia Pacific Board, and chairperson and CEO of KPMG in Vietnam and Cambodia. He is also an Honorary Advisor to the Asia New Zealand Foundation and provides his views for Kiwis on understanding the situation with China's influence in the Pacific.

As a new ‘Great Game’ for control of the Pacific escalates, New Zealand’s foreign minister is coming under pressure from all sides, writes commentator Geoffrey Miller. "For those keeping score, China has now signed co-operation agreements with Samoa and Kiribati, while the US has convinced Fiji to join its new Indo-Pacific Economic Framework for Prosperity (IPEF)."

China's foreign minister Wang Yi arrived in Fiji on Sunday - his fourth stopover in a whirlwind tour of the region. Here, China will attempt to persuade Pacific Island countries into signing a new multilateral deal in a virtual meeting with several regional leaders.

Stuff - China claims it wants development in the Pacific, not influence

As Stuff reports, China wants to help develop Pacific Island nations, not influence them as part of a geopolitical power struggle, its New Zealand ambassador says.

Jonathon Milne secures the first-ever interview with Wang Xialong, Chinese Ambassador to New Zealand,  who says the agreements have nothing to do with a military buildup by China in the South Pacific.

The front page of the NZ Herald (print edition) for 2 June 2022 featured the introduction, "China's recent moves in the South Pacific have raised alarm about the superpower's growing influence in this part of the world", where Jason Walls suggests, "New Zealand can be critical of China, but only to a point."

Nanaia Mahuta has been criticised for not racing over the islands​ while China's Foreign Minister holds meetings with Pacific leaders, signing trade and development deals. Yet in a PMN interview, the Foreign Affairs Minister is standing by her actions around China's visit to the Pacific, insisting New Zealand's relationship with the islands is in a good place.

Three senior diplomats, one of whom now works for the Asia New Zealand Foundation, are quoted in this column about Pacific influence.

In this opinion column, Brooke van Velden argues New Zealand has not used its human connections to the Pacific as an advantage in the current climate.

Experts punt into the debate and wonder how recent developments have raised questions about whether the "depth" of New Zealand's relationships matches the rhetoric.