Sport is more than just a fast time on the track or the highest score on the board.

Jaime Nielsen knows that well. For the past decade, she’s travelled all over the world, representing New Zealand at the highest levels for both rowing and cycling - and now, she’s officially been selected for the track cycling team at the Tokyo Olympics. Jaime Nielsen (centre) along with her women's pursuits teammates Alison Shanks and Lauren Ellis with their gold medals at the 2010 Beijing World Cup.

Sport becomes a bridge for connection – but alongside that, Nielsen’s love of languages has helped her as sport has taken her across the globe and across different cultures.

“I grew up going to Waitomo Caves with our Japanese homestays, and I had some insight into the culture then and that sparked an interest [in language],” she said.

When she went to university, she studied Mandarin – a skill that would come in handy during her sporting career.

It was at high school too where she was heavily involved in sports. She found she loved how she could see her personal growth almost day-to-day as she trained and competed.

Her love of sports carried her to rowing. As an 18-year-old in 2004, she won gold in the under-23 world championship quadruple sculls and before switching to cycling in 2007, she had a spot as a travelling reserve with the New Zealand rowing team. 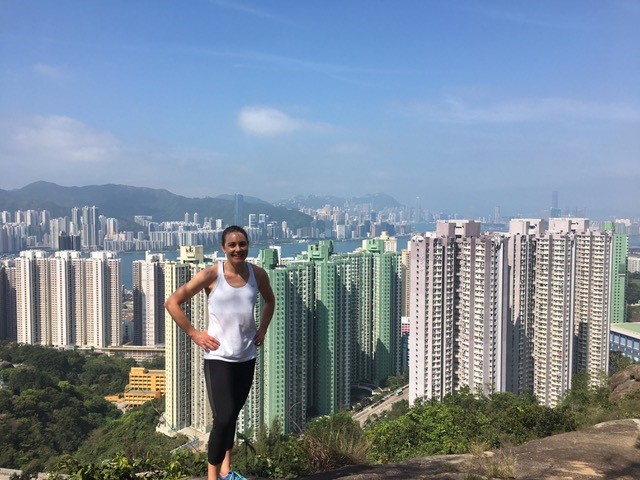 Jaime Nielsen after running up a track near the Tiu Keng Leng Sports Complex in Hong Kong. Nielsen had just won a bronze medal at the world cycling championships in HK.

Looking for a change, Nielsen took part in a BikeNZ programme, Power to the Podium, which was designed to help develop female athletes for the upcoming London Olympics in 2012.

Nielsen said it wasn’t uncommon for rowers to switch to cycling – if you’re watching rowing, you might assume athletes are mostly using arm strength, but there’s a lot of leg strength involved too.

Nielsen was ready for a change in her life and new challenges. She was considering getting more stuck into her language studies at first but ended up pursuing cycling.

“I can see more clearly now as well, I made that decision [to leave rowing] in hindsight because I wasn't fully happy.”

Nielsen quickly built up her reputation as a cyclist: she first competed for New Zealand on the international stage in 2009, at the World Championships in Poland and has raced at the Commonwealth Games in 2010 and 2014, as well as in the Olympics in 2012 and 2016.

It was with cycling that she took her first trip to Asia, to China in 2010 for the Beijing World Cup. That’s also where her language skills came in handy.

Jaime Nielsen (left) with her teammates at the 2010 Beijing World Cup, where they earned silver.

“I remember arriving in Beijing, and the bus trip to the hotel, and just seeing all the lights and [Chinese] characters shining out. I could recognise so much.”

She walked around with a translation dictionary in hand, but racing was the main thing on her mind for the relatively short trip. The trip was a success where her, Alison Shanks and Lauren Ellis took home a silver in the women’s pursuit.

She travelled to Tokyo in 2013, when the city was making their bid for the 2020 Olympics and has competed in Hong Kong at an international level.

Straight after the 2014 Commonwealth Games in Britain, she took a trip to China to take part in a martial arts camp close to Yantai.

“I was able to go into Yantai and take in a little bit more and have that feeling when you're surrounded by locals.

“I remember just walking down the street and that feeling that you're with so many people and yet you're so alone. It's quite special and it's quite empowering.”

The martial arts school, based in the Kunyu Mountains also made for a memorable – and eye-opening – time. Straight after the Commonwealth Games, where she competed in two road cycling events and one track event, she was plunged into a world of 5am starts, runs, training, and intense discipline.

The trainers and students all had incredible work ethics and would dive into 13-hour days of martial arts training.

“My motivation was after learning Chinese to put myself into that environment a little bit more,” she said. Learning languages has always been a way for Nielsen to connect with more people, to talk to them and gain cultural insights.

Currently, she’s in New Zealand, training for the Tokyo Olympics.

The Tokyo Olympics are scheduled to open in July 2021, but if the pandemic is too much of a risk for the Games to go ahead, they will be cancelled instead. For someone who is used to a challenge - like Nielsen - that’s no reason to put training on hold.

“We're preparing for it to proceed and the New Zealand Olympic Committee are providing more clarity on what to expect as it comes to light."

If the Games happen, Nielsen sees it as the first time the world can really come together again in the wake of Covid. Features
OlympicheatonBlackSticks
You’d think a sauna would be relaxing. Not so if you’re on the Black Sticks hockey team and want to prepare for the Olympics. More >
by

News
OlympicsbeckonforKiwitaekwondostar
A young Tom Burns dreamed of growing up to be a ninja. It’s fair to say he’s pretty close – the 20-year-old will represent NZ at the 2021 Olympics in taekwondo. More >
by