In New Zealand, everyone’s eyes may be turning towards beaches and the summer heat, but others have a snowier future ahead.

In early March 2022, three New Zealand athletes will be stepping off the plane in Beijing, ready for the Paralympic Winter Games.

Winter Paralympics veterans Adam Hall and Corey Peters, and first-time Para athlete Aaron Ewen, are representing the country in skiing and helping them on their journey to the Winter Paralympics is New Zealand’s chef de mission, Jane Stevens. 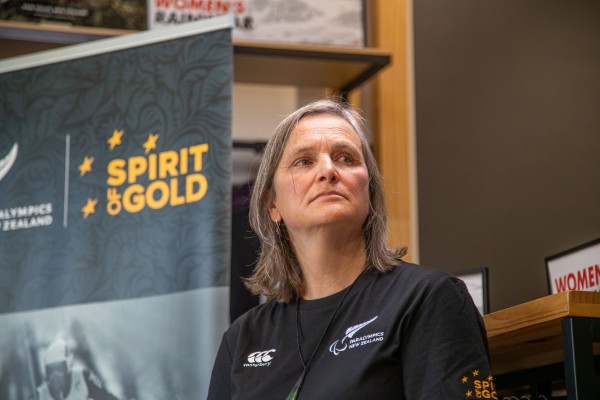 She's no stranger to the Paralympics. At the 2018 Winter Paralympics in Pyeongchang, Stevens worked as a coach and watched Hall take out the gold in the men’s slalom, while Peters nabbed a bronze in the men’s downhill sitting competition. There are three classes which run in Para alpine skiing: standing, sitting and visual impairment.

Stevens is busy preparing for the frosty slopes of China, doing what she can as chef de mission.

“My role is to provide the best possible environment for the entire team, so that they can solely focus on what they need to do.”

That means Stevens and her team will be looking after everything from the tiny details - “like what kind of posters to put on the walls to make the guys feel at home” - to the big logistic juggles of equipment.

Preparing for the 2022 Winter Paralympics also has the added complication every major event is facing: Covid. 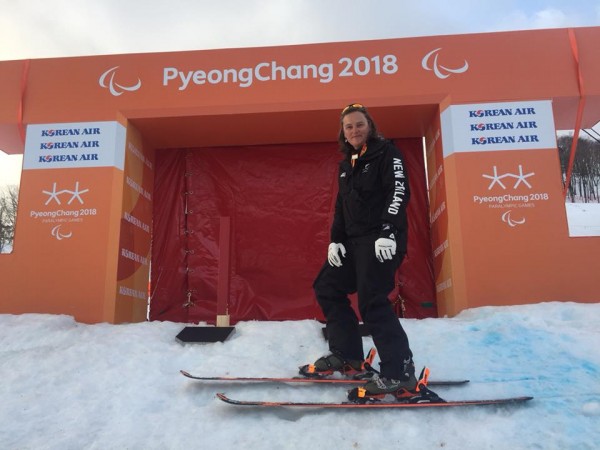 Stevens at the 2018 Paralympics in Pyeonchang, South Korea.

The three athletes are currently based in Colorado and will be training there until early 2022. Then they’ll head to Norway for the World Para Snow Sports Championships, before heading to Beijing, swapping over as the New Zealand Olympic Winter Games team leaves.

Stevens and the team will be coming in with the experience of Pyeongchang behind them too, to help ease the way in 2022.

“Going into a [Winter Paralympics] environment we always try to treat it like it's just another day and we're going to do our job but it's not. It's bigger. There's a huge amount going on around you and there's lots of distractions.”

She says coming into the Winter Paralympics with that knowledge and understanding of how everything operated in Pyeongchang makes her job of aiding the athletes and keeping their focus on the mountain easier. That focus will be especially needed as they’ll be taking to one of the steepest tracks in the world, only recently built as part of the new Chinese National Alpine Skiing Centre. 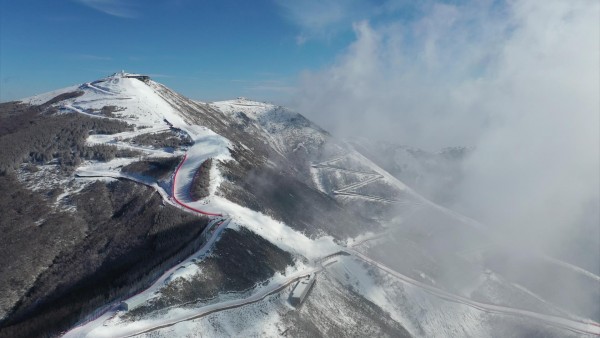 The tracks New Zealand's Para athletes will be facing in the Yanqing area in March 2022. Credit: Beijing Organising Committee of the Games

Stevens says the team is heading into the Winter Paralympics with good odds: Hall is the current reigning champion and the “stalwart of the team”, while Peters is an athlete “to watch and is constantly sitting in the top 10 on the world circuit”. Ewen, as a new competitor, is looking to prove himself in the downhill sit skiing.

Under Covid, the venues are divided into clusters, with each cluster a site including competition venues and accommodation. Since New Zealand’s athletes are all skiers, they’ll be staying 90 kilometres outside of Beijing at the Yanqing cluster, where the Para alpine ski events will take place.

They’ll be facing strict Covid measures coming into the Winter Paralympics – the team is all fully vaccinated, which means once they land, they’ll need to do a test on arrival, then head straight to their accommodation.

Even once their tests are back and clear, Stevens says there are strict protocols in testing as mandated by Beijing “every single day” and the team will form their own tight bubble to stay safe. 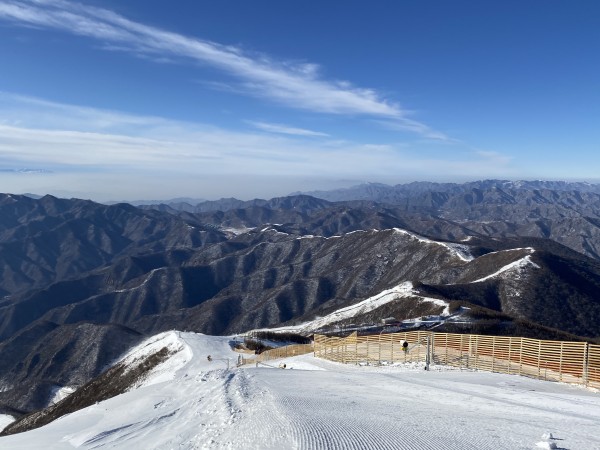 The newly constructed tracks in Yanqing are some of the steepest in the world. Credit: Beijing Organising Committee of the Games

And while it might be the Winter Paralympics, Stevens says it might not be quite as cold as people expect.

“If you think about the time that we're actually going to be there - which is March - it's coming into springtime in China.”

Winter temperatures around Beijing can fall anywhere between –6 degrees and –15 degrees Celsius. Come springtime, and you’re looking at 10 degrees and rising rapidly.

“We're looking at being prepared for it being very, very cold, but also actually quite a bit warmer than you might think,” Stevens says.

This isn’t unusual for Winter Paralympics: in the 2018 Pyeongchang Games, Stevens remembers looking down at the thermometer on her backpack and reading 19 degrees while standing on the slopes for the competition. 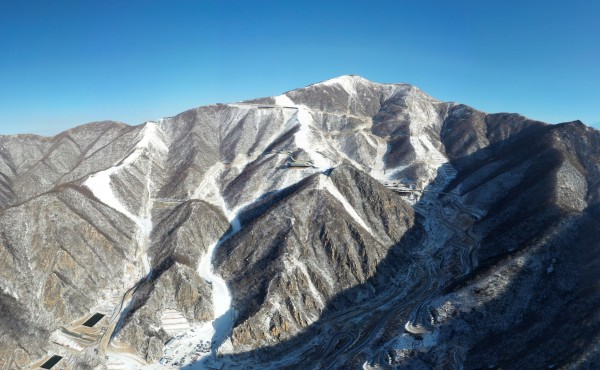 The Yanqing National Alpine Skiing Centre, based outside of Beijing, will host the alpine skiing events at the Beijing Winter Games. Credit: Beijing Organising Committee of the Games

Whatever the weather, the three Para athletes will be faced with an intense schedule during their time at the Winter Paralympics - they’re likely looking at five or six races each across a 10-day competition.

They’ll be well supported by Stevens, the deputy chef de mission Lynette Grace, coaches Ben Adams and Scott Palmer plus the medical side of the team involving doctors and physios.

“Our support team, as you can imagine, are pretty amazing people that have dedicated a huge amount of time and their energy to helping these athletes achieve their goals,” Stevens says.

Until they reach the slopes however, there’s a lot of work to be done - “lots of meetings”, Stevens says with a laugh – but the whole team have their eyes on the Beijing podiums. 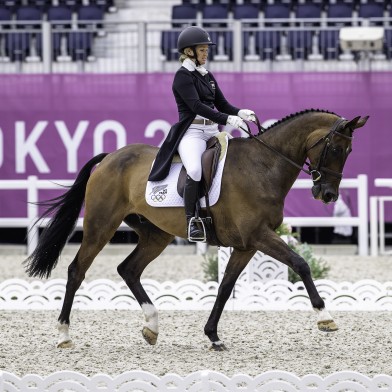 Features
TokyoOlympics:NotesfromtheVillage
AMC gets an exclusive chat with athletes in the Olympic Village in Tokyo. More >
by 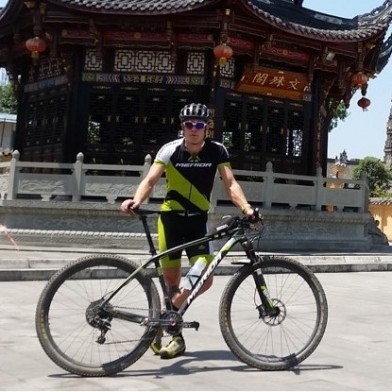 Features
KiwidominatesChinesemultisports
Up until Covid stopped travel, Kiwis had been dominating in major Chinese multisport competitions. AMC talks to athlete Sam Clark about his wins in China. More >
by 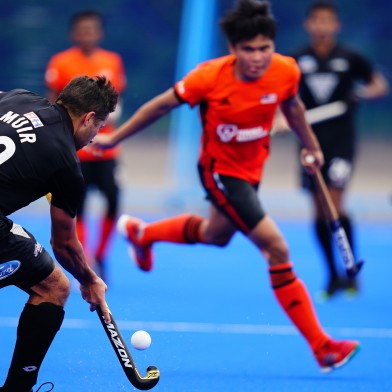 Features
OlympicheatonBlackSticks
You’d think a sauna would be relaxing. Not so if you’re on the Black Sticks hockey team and want to prepare for the Olympics. More >
by