While the COVID-19 pandemic continues to impact on Indonesia, in Bali a grassroots charity continues to change the lives of some of the country's most disavantaged citizens. Journalists Ian Neubauer and Lala Samsura report.

Bali, Indonesia -- In March, when the World Health Organization declared Covid-19 a pandemic, Robert Epstone was standing in a poor village in Bali where a mentally ill woman had been chained to a wall -- a practice known as ''pasung' that is sometimes used by poor families in Indonesia to control sick relatives.

Though banned in 1977, pasung continues because the Indonesian government extends permanent care only to people with no family. According to a recent report from Human Rights Watch, some 18,000 people across Indonesia suffer under paung.

This year, he adds, “We lost our budget because the government needs to focus on fighting the pandemic.”

As the founder and head of The Solemen Foundation, a non-profit organisation that helps the island’s poor, Epstone says he and his team have helped to free and rehabilitated more than 40 pasung victims.

Many were suffering from schizophrenia, a long-term mental health condition that can cause confusion and hallucinations. The condition can be treated with therapy and medicines, but the antipsychotic drug used to mitigate schizophrenic episodes costs more than $200 per injection in Indonesia.

Solemen, which depends on donations from tourists and the venues they frequent, has seen its funding for both medical care and food distribution evaporate since Indonesia banned tourist arrivals in April to stop the spread of Covid-19.

The ban is now scheduled to be lifted on Sept. 11, but could be extended if there is a second wave of infections. “If we don't find a solution, people won't eat,” says Epstone.

Medical experts warned initially that Bali, which received more than 100,000 Chinese holidaymakers in January alone, would be engulfed by the virus. The advice was unambiguous, especially for older people like Epstone, who at 71, is in the high-risk category: Self-isolate, or risk infection and possible death.

But Epstone brushed aside the concerns, which is perhaps not surprising considering his extraordinary resume.

In his former life, Epstone was a fashion designer in U.K. who worked with top designer Vivienne Westwood in London. But while working in Yugoslavia in the mid-1990s he began dabbling in philanthropy.

“I went next door to Romania and after seeing the terrible conditions there, I began doing volunteer work in a few villages,” he says.

That led to more aid work and during the Balkan War, he volunteered as a driver to transport baby milk formula from London to a conflict zone in the region.

In 2008, Epstone travelled to Bali to attend a wedding. “At the time I was working in Shanghai with the UK retailer Marks & Spencer . I thought it was fantastic.

In Shanghai the air had become so polluted you never saw the sun, but in Bali everything was stunning. I told myself when I turn 60, I am retiring here, and a year later that's what I did.”

But Epstone's plans for an idyllic life changed when he visited a remote village and saw a pasung victim for the first time.

“It was such a giant shock. I couldn't just stand by after seeing a thing like that. It was also hard to see the general poverty in Bali -- people living in slum-like conditions next to five-star hotels where tourists holiday with blinkers on.”

His first philanthropic project in Indonesia was a five-month stint on the remote island of Sumba digging wells for Rotary International.

In 2011, he walked 535 kilometres barefoot around Bali to raise awareness and funds for poverty alleviation on the island. Epstone also pledged to remain barefoot until he raised $1 million for Solemen -- a target he achieved within five years without calling on his wealthy fashion contacts.

“I didn't try to leverage those relationships,” he says. “I was glad to get out of the fashion scene. I wanted nothing more to do with it.”

His biggest challenge, however, came during the COVID-19 pandemic, when funding for the organisation dried up. Epstone came up with the idea of placing food-drop boxes in Western-style supermarkets catering to the estimated 10,000 tourists and expatriates who remained in Bali during the pandemic.

“The biggest supermarket chain said they were too busy. I said we're also busy saving lives. What are you busy doing? Making money?; Next I tried an independent supermarket, and before I finished my pitch, the manager agreed,” he said.

“It has been an enormous success: We got the food we needed and their sales went up because people were buying two of the same thing.

Another independent supermarket came on board and their sales went up, too.

Then Gojek [an Indonesian transport-to-retailing conglomerate] heard about it, and offered to deliver all the food we collect to the people who need it. [Then] the supermarket that initially rejected the idea said they'd changed their minds and wanted to come on board.”

The feared large-scale outbreak of COVID-19 has not materialised in Bali, but the impact of the crisis on the local economy has been devastating.

But with confirmed cases rising, Solemen's position remains tenuous -- and it is not alone. In March, a global survey by CAF America, a U.S.- based philanthropic organisation, found that 70% of charities have seen a significant drop in funding. A follow-up survey in May found that 60% of charities across the globe have had to eliminate or suspend services. 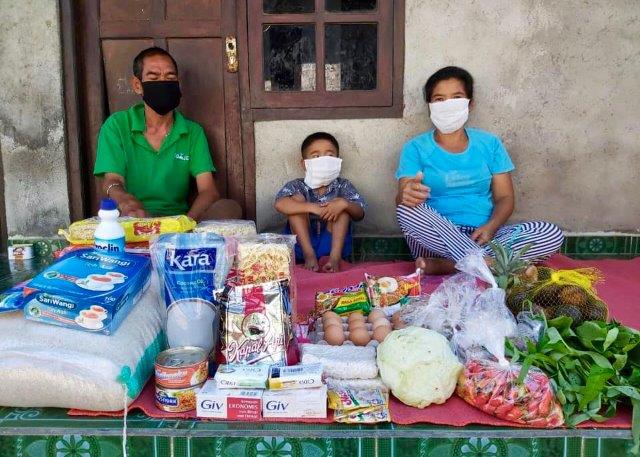 To put the organisation back on a sustainable long-term footing, Solemen has developed a five-year plan to reduce its dependence on fundraising by emulating the “philanthrocapitalism” approach pioneered by The Bill and Melinda Gates Foundation, set up by the co-founder of Microsoft and his wife, and funded mostly by investment income.

Solemen’s first philanthrocapitalism project is a health food made from the leaves of the moringa plant, which are said to promote human health. “We've developed a powder that we already sell to hotels for smoothies and cocktails, and capsules you swallow to boost the immune system, says Epstone.

“We also plan to make lip balm from it, [along with] cellulite cream and energy bars, and will set a shop up online to export it. If we can develop a global market, we may not need any more donations.” The website medicalnewstoday.com says moringa can be used to treat or prevent a variety of health problems, but can cause complications if taken with some Western medications.

Solemen, which has about 20 employees working on half-pay, is also striving to show people how to feed themselves using home aquaponic kits, which recycle nutrient-rich water from fish farming to boost horticultural harvests.

“It's an ancient system of agriculture that was once widely used in Indonesia,” says Pak Gusti, Solemen's aquaponics specialist.

“Within three weeks, you can harvest enough kale every day to feed a family of four. In 10 weeks, you can eat the catfish. Our aim is to have 1,000 [kits] running within five months. It's better than giving people bags of rice because when the rice ends they need more.”

Solemen is also trying to help workers who have lost their incomes because of the pandemic, including in the tourism industry. The island’s government is distributing food and cash payments, and workers in the formal sector of the economy can apply for $40 a month welfare payments for three months.

But there is little help for the 70% of the labour force in the informal sector.

Until the travel industry recovers, tourism-dependent charities such as Solemen can help to fill the welfare gap. But they need sustainable funding. “Relying on handouts is not the answer,” says Epstone. “We have to generate our own income.”