School leavers report - students talk about how to get more students interested in Asia.

Asia New Zealand Foundation research has found less than 10 percent of school leavers are ‘Asia-ready’ and only 36 percent are ‘in the zone’ when it comes to Asia readiness*.

The Foundation’s Losing Momentum – School Leavers’ Asia Engagement report also finds that while 69 percent of senior secondary school students believe Asia is important to New Zealand’s future, only 37 percent believe Asia-related skills and knowledge will be important for the country’s future workforce. In 2012, when the Foundation first surveyed school leavers, 46 percent believed it would be important.

The survey also reveals 18 percent either ‘do not believe Asia is important to our future’ or ‘have no interest in Asia or Asian cultures’.

“If this continues, our kids will likely miss out on life-changing opportunities brought about by the rise of Asia’s influence and relevance to New Zealand,” Mr Draper says.

He noted businesses are increasingly looking for employees who have Asia-related skills and knowledge — and they are not getting those skills.

“All indicators show Asia will play a critical role in young New Zealanders’ careers, their personal relationships, and their life experiences. Developing Asia-related competencies will be a necessity for their future.”

The survey also shows general knowledge of Asia has decreased. Students scored less than six out of nine on basic Asia questions, a small drop from 2012.

“These trend lines are in the wrong direction. There needs to be a course correction if we want school leavers to thrive in the Asian century,” says Mr Draper.

The survey revealed an urban-rural and socio-economic divide. Those who feel they know nothing about Asian countries — about one in five students — are more likely to come from the two lowest deciles, are likely to be Māori or Pasifika, and live in a small town or rural area.

“We don’t want a two-tier system when it comes to Asia readiness. This is a bad outcome and is unfair,” says Mr Draper.

“We hope this report prompts schools, parents, students, educators, officials, and community groups to engage in a meaningful conversation about whether we should formalise learning about Asia in our education system.”

On the positive side, the survey reveals those who say they cannot describe anything about any Asian country tended to answer four out of nine Asia-knowledge questions correctly.

“These kids obviously know more than they give themselves credit for and this is similar to what we found in our annual Perceptions of Asia survey released earlier in the year. Too many of us are not backing ourselves in what we already know about Asia and this inhibits our ability to ‘give it a go’,” says Mr Draper.

The survey also shows that the more students knew about Asia, the more they understand the importance not just of language, but also of culture, customs and traditions.

Languages are one pathway to learning about Asia, but the signs are not positive here either. The proportion of Year 12 and 13 students learning an Asian language fell from 39 percent in 2012 to 34 percent in 2016. Surprisingly, we estimate 17 percent of students in schools with Asian language courses were not even aware their schools offer them.

However, more than half (59 percent) of students not currently learning an Asian language were interested in doing so in the future.

Asked how prepared they felt to engage with Asian people and cultures in New Zealand, 45 percent felt prepared.

This report presents the results of a survey of Year 12 and 13 secondary school students, conducted in late 2016 by Colmar Brunton for the Foundation. The survey interviewed a random sample of more than 1,000 students throughout New Zealand. It is a follow up to the initial survey commissioned by the Foundation in 2012. 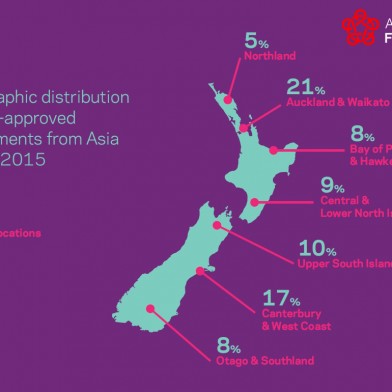 Resources
Report:AsianinvestmentinNZ
Research commissioned by the Asia New Zealand Foundation has found investment from Asia accounts for a relatively small share of all foreign investment in NZ. More >
by