Adam McConnochie is Director Leadership and Entrepreneurship at the Asia New Zealand Foundation.

Adam McConnochie directs the Asia New Zealand Foundation’s entrepreneurship and leadership programme, equipping Kiwi leaders and entrepreneurs to thrive in Asia. As part of his role, he’s helped leaders and businesspeople travel and build their networks between New Zealand and Myanmar. He writes for the AMC about why he's still optimistic about Myanmar's future, despite the recent coup.

Watching the recent coup unfold in Myanmar has got me thinking about the famous ‘60s protest slogan ‘the revolution will not be televised’.

And while Gil Scott-Heron was not being literal, it seems the opposite is true – or at least the phrase should be updated to say ‘the revolution will be captured on social media’.

We saw this with the storming of the capital in Washington DC and in Myanmar.

This has ranged from the ridiculous – if you haven’t seen the clip of workout instructor doing her thing while tanks roll down the road behind her you should – to the more poignant. 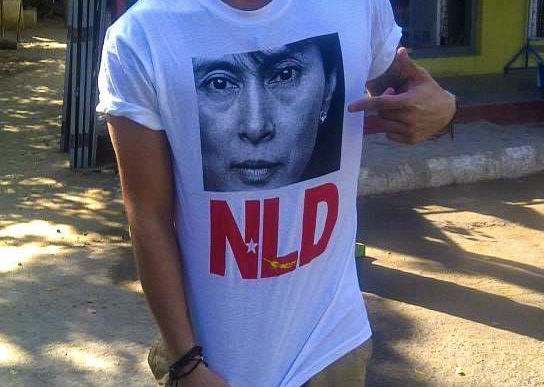 A supporter wearing a National League for Democracy t-shirt.

I was struck dumb watching a friend of mine, an Australian-Singaporean, send a series of messages via Facebook explaining when the phone lines went down and how long she expected the internet to last.

She was in Phnom Penh, trying to get back to Myanmar where her business and team, her apartment – her dog – were all waiting for her. Watching the coup unfold from outside left her with a feeling of helplessness.

“Myanmar has been a part of me since I was five years old and has been part of my adult life and my home for the last nine years," she said, “I was living there for the coup that started in 1989 and now to watch this happen and see how things unfold is unbelievable.”

The coup in Myanmar is no doubt a massive step back for the country.

I travelled to Yangon in 2016 when Myanmar was at the peak of its popularity in the west. Anthony Bourdain had travelled to Bagan via train and Aung San Suu Kyi - ‘The Lady’ - had been welcomed by Obama to the White House. The excitement and feeling of freedom were palpable. Myanmar entrepreneurs and businesspeople during an Asia New Zealand Foundation trip to the country in 2016.

But there were still concerns.

It was clear then that the rapid opening up of the country had seen winners and losers. The wealthy elite could shop at the newly opened Korean blind shops and modern supermarkets, but this was clearly not accessible to all.  And while shiny new shops were signs of growth, it was clear that sanctions lifted by the international community and a sudden rush of foreign direct investment into Myanmar had allowed a class of junta-adjacent business-people to benefit and enrich themselves.

I was also shocked by a presentation that described how most of the new buildings were so flimsy that an earthquake (the major cities of Yangon, Naypyidaw and Mandalay sit on a faultline) would cause catastrophic damage and death.

But this was still a massive change from 2012 when Myanmar began to open to the world and I started working more closely with entrepreneurs from the region through my role. Myanmar has been opening up to the world over the last decade, and too much progress has been made to stuff it back in the bottle, writes Adam Mconnochie.

Inviting entrepreneurs and businesspeople to New Zealand in 2012 was a logistical and political challenge with sanctions in place and concerns at the highest levels of government.

The opportunity then was less about trade and more about government services. For example, I remember setting up a presentation for New Zealand to potentially rewrite the Myanmar national telco regulations because the military had just deregulated this sector. Progress has not been linear either. Since taking power Aung San Suu Sung Kyi has failed to form a constructive relationship with the army and shown little interest in constraining their worst impulses.

But yet, I’m still optimistic about the future because I just can’t see how everything can be stuffed back into the bottle.

Too much has happened for a return to the bad old days from 2012.

I’ve seen these changes first-hand: one of the impressive businesspeople I brought to New Zealand in 2014 said he was going to build Myanmar’s first private university (education had suffered massively under the military junta).

He has recently succeeded. Myanmar has seen a lot of change happen in a short time.

One of Myanmar’s most dynamic and prominent entrepreneurs has been live-streaming the protest movement on his smartphone and has proudly changed his Facebook status to show his support for the civil disobedience movement.

This is a far cry from the crony-capitalism that has bedevilled Myanmar in the past.

For many years New Zealand has been bringing civil society leaders – heads of NGOs, community development leaders and others here for training and to build connections with like-minded organisations.

These people and many more have the connections, skills, and confidence to keep rebuilding their country and I think they will.

They are connected to the world, many have travelled, many have achieved longstanding ambitions or have webs of networks across Southeast Asia, but also in places like New Zealand. And they have smartphones. Images of the coup have been captured and shown by social media and news outlets around the world.

The world is watching Myanmar. Yes, this didn’t stop the Rohingya genocide and leaders across the Myanmar political spectrum have shown disinterest in what the rest of the world thinks. Opinion
Myanmar:Nowforthefuture
The results of Myanmar’s 2020 elections are in: Aung San Suu Kyi’s National League for Democracy (NLD) has been re-elected in a landslide. The new government wi More >
by Gerard McCarthy