News coverage of the Rohingya situation by major English-language media outlets largely follow the state line and the general sentiment of the Myanmar people – that the international perspective on the refugee crisis is inaccurate, writes Waikato Times reporter Thomas Manch.

You could be forgiven for thinking all was well in Rakhine state while living in Yangon.

The popular viewpoint among Buddhist Bamar, the dominant ethnic group, is that the international perspective on the Rohingya refugee crisis is inaccurate. The Rohingya (referred to as “Bengalis”) are treated with racist disgust. Young Myanmar people I spoke to in Yangon about the issue would make claims about the violence perpetrated and the heritage of the Rohingya people, supposedly evidenced by what they learnt on Facebook. This makes such conversations difficult.

The situation is covered by the major English-language news outlets, the Myanmar Times and Irrawaddy, which both largely follow the state line and the general sentiment of the Myanmar people. Recent reports have included broadly positive accounts of the Government's work harvesting crops left behind by fleeing Rohingya; Daw Aung Sang Suu Kyi’s speech in response to the United Nations’ call to end violence in the state; and unquestioning reports of the proposed repatriation process.

Little to no access to Rakhine state is provided to the media, and I would be surprised if many Myanmar reporters have travelled to Bangladesh. Frontier, a small operation focused on analysis of current affairs, is one of few local media I came across willing to take a strong editorial line against the Myanmar government. 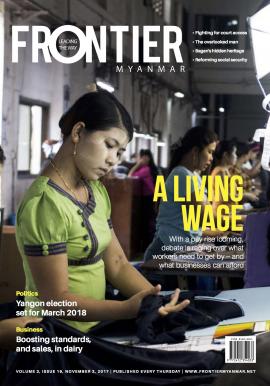 I was given a fair amount of latitude during my time in Yangon. Busy as its editorial staff were, they were relaxed about my work and largely left me to my own devices.

I travelled to Mandalay to check out New Zealand's aid project bolstering dairy farm operations there and worked up an overview of the dairy industry as a feature for the magazine. I also worked on a story about alleged financial interests (read: cronies) keeping semi-trailers off the main highway, which is costing the country a fortune in transportation costs; and a story about discrimination against Muslims in Myanmar’s citizenship process.

In Yangon, I stayed in a small hotel in a little neighbourhood called Yaw Min Gyi, just north of downtown and west of the Frontier office. The neighbourhood is popular with Westerners and has a mix of western-style cafes and more traditional food venues, which makes for a comfortable bubble to live in, but I tended to go downtown to eat and explore.

In terms of “culture shock”, the most mind-bending thing to get your head around was simply the lay of the land. It seems no matter how well-read you are on Myanmar, there are untold quirks to the place and everything is changing incredibly fast. From a reporting perspective, it could be a little exhausting as it is first difficult to find information and then confirm it is not already irrelevant.

What isn't exhausting is interacting with the people. Everyone is warm and open to spontaneous humour, which is entirely charming. It also feels incredibly safe, people are generally honest in their dealings (though there is – rightfully – a slight difference in price for foreigners compared to locals), and both the city and country are fairly straightforward to navigate.

In my spare time I visited Bagan, the ancient pagoda-littered river valley, and headed into the hills of Shan State by train for a spot of hiking. There's truly a lot to do here, so I'll have to come back.