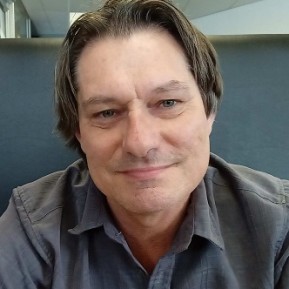 In April, some members of Myanmar’s civilian elected government, who had escaped arrest when the government was overthrown by the military coup in February, formed the ‘National Unity Government’ (NUG).  The NUG also includes representatives from ethnic minority groups and civil society, united by their opposition to the military and aspirations for a future federal democratic Myanmar. Last week, the NUG declared a ‘people’s defensive war’ against the military junta. Researcher Stan Jagger looks at the significance of this latest move in Myanmar.

Reasons for the February coup in Myanmar remain unclear.

Initial claims from the military of widespread electoral fraud by the National League for Democracy (NLD) in the November 2020 election have been discredited.

Maintaining the economic interests of senior generals and their families, as well as concerns the military, even under their own constitution, were losing their grip on power, are more likely contributing factors.

The Tatmadaw’s response to widespread protests and civil disobedience against their takeover has been predictably brutal and violent. Over 1,000 civilians have been killed and over 6,000 people arrested in violent crackdowns.

Internationally, UN reaction has mostly consisted of issuing statements, while Russia and China block any real action through the UN Security Council. 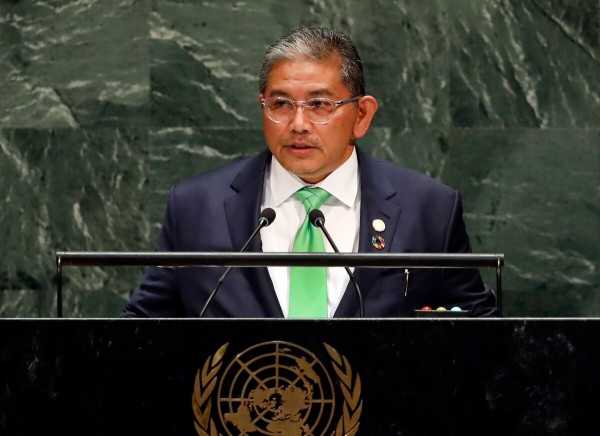 Some western countries imposed sanctions, but the military still collects significant revenue from oil and gas and other economic activities, enabling it to continue purchasing arms from suppliers including Russia and Pakistan.

The regional grouping of Southeast Asian countries, ASEAN, has only engaged diplomatically with the junta, largely ignoring the NUG.

ASEAN’s ‘special envoy’ to Myanmar recently called for a ceasefire and for dialogue between the parties, while still not engaging directly with the NUG.

The timing may demonstrate the NUG’s frustration with five months of ASEAN’s weak, one-sided diplomacy which the military can easily choose to ignore.

Evolution of the resistance

From March onwards as the junta’s violence escalated, some anti-coup protestors started to turn to armed resistance.

In some areas, groups that would become ‘people’s defence forces’ (PDFs) started to form.

Armed initially with homemade rifles and a few weapons captured from police and soldiers or obtained from ethinic armed organisations (EAO's) with whom they have also gained training, the groups have grown and proliferated. 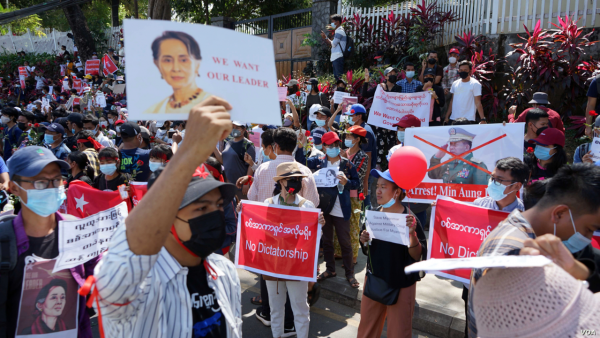 Highly motivated and using their knowledge of the local terrain, they have inflicted significant casualties on the Tatmadaw. PDFs have been active in some rural Bamar majority areas, such as Sagaing and Magwe regions in the northwest, that have not previously seen this level of armed conflict, as well as in ethnic areas including Chin and Kayah states.

At the same time, long-established EAO's that have fought the military for decades, particularly the Kachin Independence Organisation (KIO) and Karen National Union (KNU), have expressed support for the anti-coup movement.

Clashes have escalated, with these EAOs capturing some Tatmadaw bases, but with civilians in ethnic areas then subject to retaliatory airstrikes and shelling leading to many thousands being displaced.

Initial reaction in Myanmar’s towns and cities to the NUG declaration included people stocking up on supplies and increased presence of police and army in the streets.

On social media, many people expressed support for what they believed was the much anticipated ‘D Day’ heralding the NUG’s military campaign to overthrow the junta.

In reality, fighting between the junta’s forces with PDFs and renewed fighting with EAOs has been ongoing for some months.

Since the declaration there has been an uptick in armed clashes and a series of attacks against military-owned infrastructure such as Mytel cell phone towers.

The NUG statement also called on EAOs to ‘claim back’ ethnic lands in unity with the uprising against the military, but major EAOs controlling parts of Shan and Rakhine states currently remain on the side lines and have not committed to the struggle.

It should be noted that people in conflict affected non-Bamar ethnic areas may expect the declaration to only bring further fighting and displacement which has afflicted them for decades.

One other group addressed in the declaration were members of the police and Tatmadaw.

They were called upon to defect and join the resistance. While there has been a trickle of defections there has not been any major unit level defections or splits within the Tatmadaw, but that possibility presents one of the more significant factors that could decide how events evolve in coming months.

Internationally, western governments have expressed discomfort with the NUG’s willingness to undertake armed resistance to the junta.

The US and UK released statements expressing concern, addressing ‘all parties’ and calling for ‘dialogue’ in response to the declaration.

It is difficult not to see the contradiction with the minimal action they have taken since February while now admonishing people for taking up armed resistance against a regime that has been shooting them in the streets for months.

There has been immense disappointment in Myanmar with the absence of any real international or UN action over the coup, revealing the hollowness of the supposed doctrine of the ‘Responsibility to Protect.’

Diplomatic statements about ‘both sides’ to the conflict wilfully ignore the fact that the Tatmadaw, consisting of maybe 300,000 soldiers, has virtually no popular support in a country of 54 million people, even among the Bamar majority from which most of the military are drawn.

Despite the attention the recent declaration of defensive war has drawn, resistance to the junta has actually included both non-violent and violent action.

Much of the resistance to the junta in Myanmar has involved courageous non-violent protests and civil disobedience strikes making it difficult for the military to run the country.

Armed resistance has evolved to contribute another dimension to the resistance. Both approaches seek the same ultimate outcome of finally removing the oppressive military.

However, the armed resistance is also problematic. There has been an increasing campaign of bombings and assassinations of junta-appointed administrators and suspected informants that the NUG, despite its code of conduct for its associated armed forces, has little effective control over.

Potential urban guerrilla warfare in major cities like Yangon and Mandalay is a worrying prospect. 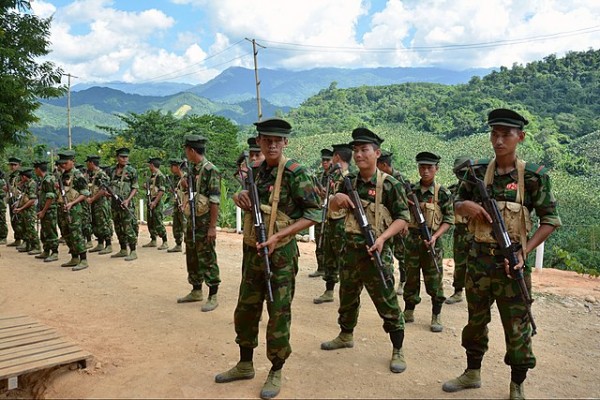 The NUG foreign minister, Daw Zin Mar Aung, has herself highlighted the lack of international action on Myanmar over the last seven months as central to the decision. The moribund UN has essentially deflected the issue on to the ineffective ASEAN process.

Another potential factor at this time is drawing attention to who will represent Myanmar at the UN.

The UN Credentials Committee will meet to discuss that question during the meeting of the UN General Assembly in New York this month. The committee makes recommendations to the Assembly about whose credentials to accept. Myanmar’s ambassador to the UN, U Kyaw Moe Tun, sided with the elected parliamentarians in February, and claims the right to remain in the seat as the representative of the legitimate elected government.

The junta, of course, wants its own representative to have the seat. The most likely scenarios are either Myanmar's seat being left vacant, or the decision being deferred, allowing the NUG representative to remain for the time being.

A potential scenario could see Myanmar’s seat at the UN left vacant for the time being.

In another move related to international recognition and law, the NUG has also recently submitted an application to join the International Criminal Court as a means of gaining international legitimacy and potentially bringing prosecutions against the military.

A more pragmatic reason, suggested by some observers within Myanmar, is that the military has for months been arresting suspected members of PDFs in towns and cities. The NUG may have felt they needed to take the initiative at this time.

New Zealand’s role and looking ahead

For its part, New Zealand could recognise the NUG as the legitimate, democratically elected government of Myanmar and support it holding the UN seat.

The NZ government has already stated it does not recognise the military junta.

Representatives of the NUG recently reached out to NZ parliamentarians who have also received a widely supported petition initiated by the Myanmar community in NZ asking the NZ government to recognise the NUG.

The NZ government has also stated it will not allow its aid to benefit the military junta.

This is significant, as ‘humanitarian neutrality’ assuming a false equivalence between the Tatmadaw and the vast majority of people opposed to it, would not actually be neutral. 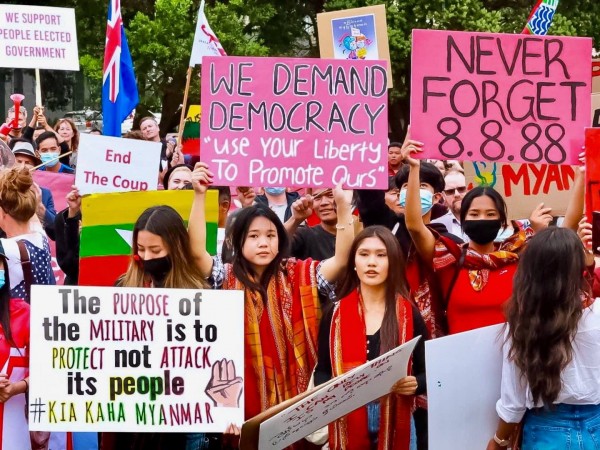 Instead of working through junta-controlled channels, principled support for appropriate and legitimate local humanitarian providers should be prioritised. NZ could direct funding to well-established local welfare organisations, including some that can work cross-border, to assist displaced people who are often in non-junta controlled and conflict affected areas.

These organisations have conducted this work for decades, have good relations with EAOs and come from the same communities.

Perhaps the issue that is most uncomfortable for the international community is that many governments, while expressing concern about the NUG’s declaration of armed resistance, may be betting on the military junta to prevail.

They expect it to continue holding the levers of political and economic power, including access to Myanmar’s extensive natural resources. It is the junta they expect to do business with going into the future.

If the current popular resistance does manage to unify and finally overcome 60 years of brutal military domination, I am certain the people of Myanmar will remember who did and did not support them at this time.

The opinions expressed are those of the author.