Japan's new emperor and new era are both nothing more than symbols. But that doesn't make them any less important to Japanese people, writes Dr Penny Shino.

Literally epoch-making events have been unfolding in Japan this week. On April 30, Emperor Akihito relinquished the sacred imperial regalia and state and privy seals and proclaimed his abdication from the Japanese throne. The following day, his elder son Naruhito ceremoniously received the symbols of imperial authority and acknowledged his accession to the throne. The era name changed overnight, from Heisei ("achieving peace") to Reiwa — which the Japanese government recommends be translated as "beautiful harmony".

How is the Japanese public responding to this moment, even if we might wonder what can possibly change when it’s just a new name and a new face in a role which is, by constitutional definition, entirely symbolic?

It’s important to note that "abdication" in the Japanese context is free of the somewhat scandalous nuance the word carries in the United Kingdom and Commonwealth countries, inextricably linked as it is with the abdication of King Edward VIII in 1936 to marry his American lover, divorcee Wallis Simpson. So no horrified hands were raised when news broke of the emperor’s desire to abdicate some years ago.

The Japanese public handled the news with delicacy, understanding and pragmatism. They have readily accepted that an elderly man, now 85, has done his very best for 30 years in the strangely difficult role of a "symbol of the people", and deserves to enjoy the peace and privacy of retirement — as does his consort Empress Michiko, who has stood steadfastly by his side all the years. Unlike the British monarch, at his accession Akihito made no solemn vow to serve as emperor until the end of his days. The main political concern was to avoid any public perception that the retired emperor might somehow puppeteer from the sidelines. This conduct has not been without precedent — in early medieval times, the leisure of retirement afforded the emperor the opportunity to wield real political power in place of a very young emperor regnant. This seems most unlikely this time: it has been made very clear the emperor and empress are not only stepping down, but out of public life. They will relocate to another palace in Tokyo that will be renamed the Sentō Imperial Palace. Sentō means "cave of a hermit-wizard", with strong nuances of withdrawal from the secular world. This seems to be precisely the life for which Akihito has yearned.

It has been instructive to observe the mood surrounding the events of the last couple of days. Japan is in holiday mode regardless. It is "Golden Week", when four public holidays and weekends coalesce, allowing the Japanese a rare opportunity to take an extended break. This year Golden Week is augmented by a special public holiday, to celebrate the new emperor’s accession. People are feeling cheerful and optimistic.

Not surprisingly in this context, this mood extend to their attitudes to the new Reiwa era, which they anticipate with much positivism and hope. Above all, the public seem to relish the chance for a national reset: the Heisei era has been characterised by severe economic recession, catastrophic natural disasters and gnawing awareness that Japan is no longer an affluent middle-class society, but a nation of haves and have-nots (kakusa shakai "a society of differences") in a world in which Japan lost its place as No. 1 many years ago.

Even while acknowledging the Heisei legacy of peace (at least domestically, and with some exceptions such as the Aum terrorist attacks), technological advance and the selfless service of Emperor Akihito at the side of his people in times of both grief and joy, the Japanese are not sorry to say goodbye to the Heisei era. They welcome the start of the Reiwa years as the threshold of a "bright future full of peace and hope that we can be proud of" (Prime Minister Shinzō Abe’s words). 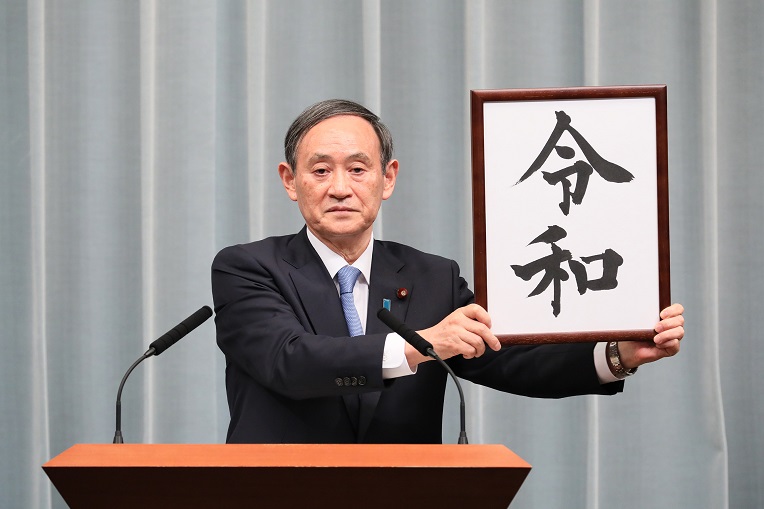 One thing the Japanese are less sure about is the actual meaning of "Reiwa".  This is a freshly coined word made up of two characters occurring separately in the same sentence in a preface to a poem in the eighth century anthology Manyōshū. Both characters carry a range of possible meanings and nuances. Rei, intended in this instance to mean "noble beauty", has alternative overtones of authoritarian rule which naturally the Foreign Ministry has been quick to refute and in any case do not reflect the context of the original source. Wa can mean "harmony" or "peace", but also denotes "Japanese" as in washoku (Japanese food), wafuku (Japanese dress), washitsu (Japanese-style room) or waneko (Japanese bobtail cat).

Commentators have not failed to pick up on this potentially nationalistic nuance. The fact that the new name was for the first time in history sourced in a collection of Japanese poetry and not a Chinese chronicle is a statement in itself. But whatever the politicians and scholars insist, it is likely that "Reiwa" will create its own unique meaning as the years go on, domestic and international events unfold and people’s lives and memories bear their imprint.

In any case, compared with what I imagine would be an all-day party in some countries, the start of the Reiwa era has been fairly low-key. There have been special era-change bargain sales and souvenir goods manufactured. One department store in the upmarket shopping district of Ginza was giving out measures of sake in wooden cups branded with Reiwa and anpan (sweet bean jam buns). But where are the fountains overflowing with champagne or processions through the streets? National television broadcast the abdication and the accession ceremonies live, but even these events were pared back and minimalist, each lasting no more than 10 minutes. The first took place in a bare, wooden-floored chamber, furnished with a platform draped in white cloth, three unpainted wooden stands, and the pair of imperial thrones — also very simple, like mega-sized dining chairs — backed by a maroon screen with a subtle gold design, possibly of rice grains. The second ceremony required only one throne, as the empress, with no right of succession to the throne, was not entitled to attend. The protagonists in both ceremonies (in terms of decoration at least) were the sacred sword and jewel, each in beautiful brocade-wrapped cases, and the two purple-swathed seals of state, which were marched in and out and presented to, then removed from, outgoing and incoming emperors with great ceremony.

It seems for more spectacle we must wait until the enthronement ceremony of October 22, which will be attended by foreign dignitaries from about 200 countries.

As I suggested at the beginning, it is easy to be cynical about how Reiwa will be different from Heisei. The emperor is severely circumscribed in his role as "the symbol of the state and of the unity of the people", and his activities and aspirations can have little impact on the lives of most Japanese. He can follow in the footsteps of his much respected father, always spiritually at his people’s side and modelling the Japanese virtues of empathy, forbearance and humility. But he cannot effect real change.

On the other hand, the Japanese have great faith in the talismanic and creative power of words, or kotodama, and it may turn out that a new word — Reiwa — was all that Japan needed. And like the portable shrines that are roughly tossed and jolted around the neighbourhood on people’s shoulders at festivals, the Japanese want to give things a good shake-up from time to time. It restores the energy and life-force. Reiwa at this stage may simply mean renewal. Features
TheKiwilawyerleadingthewayinJapan
When Catherine O’Connell started setting up her own law firm in Tokyo, she didn’t realise she would become a pioneer in more ways than one. More >
by Tao Lin