At last week's China Business Summit in Auckland, Caixin Magazine Publisher Hu Shuli joined the list of senior Chinese commentators talking positively about China possibly joining the CPTPP trade pact.  The issue was raised by China’s Premier a month or so ago.

At the same meeting, Trade Minister Hon David Parker noted that New Zealand would be open to looking at this possibility. Importantly, he commented that China had yet to formally approach New Zealand or the wider CPTPP membership to consider an application for membership.

It's the "Comprehensive and Progressive Trans-Pacific Partnership" , the CPTPP. It's been billed as a "next-generation" agreement, covering 11 nations and featuring a suite of comprehensive trade liberalisation measures, including tariff elimination, investment protection, and a raft of strong rules and regulations on services trade.

It began simply - as the TPP, the Trans-Pacific Partnership. Its original architects – Singapore and New Zealand – were very open to any economy joining, so long as they could meet the high standards expected.  This concept did not really change throughout the negotiations.

The CPTPP's Chapter on State Owned Enterprises was essentially drafted by a team of lawyers in Washington DC led by current WTO Deputy Director-General Alan Wolff, and with China in mind.

Why would one want China-tailored disciplines embedded in the agreement if you did not believe that China might one day become a member?

At a superficial level then, this positivity by China towards the CPTPP is good news.

While many academics and think tanks in China have been open to CPTPP, for some time the Beijing government position has been very cautious.

In attempting to bolster support for the Agreement when it was called TPP and when the US was still part of the process, some in the US and the region argued that the agreement was a counter-weight to China’s growing influence.

Indeed, TPP was included as an element of the late Obama administration’s pivot to Asia.

Many in the media described TPP as an anti-China initiative.  No wonder the higher levels of the Chinese Communist Party viewed the Agreement – even after the US left it – with some suspicion.

There was a risk that those in the CPTPP might be seen in a negative light by China.  This risk now passes if China actually carries through and requests membership.

However, I advise caution.

Does China actually want to join CPTPP, or is it fomenting mischief?  China will know that a decision on expanding the membership – particularly to a major economy such as China – will raise complex issues for the existing CPTPP members.

CPTPP has an open accession clause which essentially says that it is open to any state or Separate Customs Territory that existing parties believe are worthy of admission.  All decisions are taken on a basis of consensus.  Any one existing member therefore has a right of veto.

Relations between two of the CPTPP members – Canada and Australia – are far from good at present.  How would they react to the prospect of China seeking CPTPP accession?

And in the case of Canada things are even more complicated.  When Canada and Mexico agreed to the updated NAFTA ( now called USCMA in the US) they signed onto Article 32.10.  This requires notification to the other Parties of the intention to enter into an FTA with a “non-market country” with which no party has signed an FTA.

Guess what? The USMCA members define China is a “non-market country” and none has an FTA with China.

So China seeking CPTPP membership would trigger this provision.  Essentially Article 32.10 would allow the US to demand any changes it sees fit to such an FTA.

If it is not satisfied with the outcome in this FTA the US would have the right to terminate USMCA.  Should the US maintain a hostile attitude to CPTPP (a terrible deal according to President Trump) and should the US not welcome Chinese accession to CPTPP it could – in effect – be asking Canada and Mexico to choose between it and China. 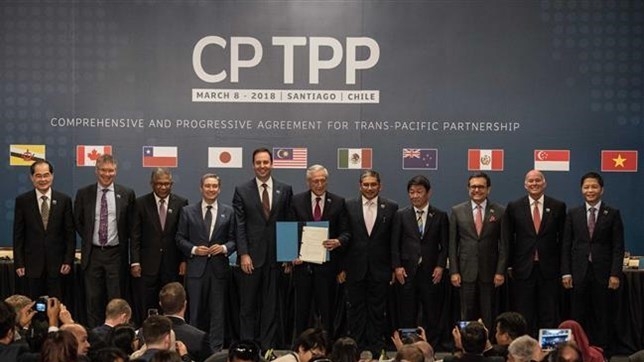 The clear leader of CPTPP is the largest economy – Japan.  How would Japan welcome an even larger economy joining at this point in time? What would it mean for Japanese leadership?

Finally, what would China joining the CPTPP mean for other prospective accessions to the agreement?

Thailand, the Republic of Korea, Colombia, and the UK are often talked about as new members.

Taiwan is very keen and clearly meets the entry standard.  And Hong Kong – a separate customs territory under WTO law does too.  Might a Chinese accession at this point in time risk these other processes?  At the very least, the China-CPTPP negotiation would be a long and complicated one.  If it were to take place at the same time as other accessions it has the potential to influence and delay these negotiations.

The USMCA was signed in Buenos Aires in 2018/ photo WH

What should New Zealand do?  Well, we should welcome a positive Chinese attitude to CPTPP and encourage China to keep thinking that way.

But we should not be assuming that this is going to be easy.  This could be a very clever Chinese strategy to make some existing CPTPP members very uncomfortable.  And if China were to seek immediate accession it would be a major complication to some existing processes.

The trade policy world is under pressure from multiple angles – increased protectionism in some markets, the Trump administration, and pressures on the WTO.

We are also in the early stages of a major global contraction.  It might pay for everyone to allow things to settle down before embarking on major new initiatives.

Long term I hope that all of APEC and other open economies outside APEC will seek to join CPTPP.  This would include both China and the US.

The question I cannot answer at this point in time is whether the US will be more likely to join CPTPP if China is already a member, or whether it would be more comfortable re-joining the agreement first, and thus being able to have more influence over the negotiation with China?

Clearly nothing is going to happen under President Trump, so we might be four and a half years away from having to find an answer to this question.

In the meantime, let's get Thailand, South Korea, Colombia, UK, Taiwan and Hong Kong into the CPTPP.