Fifty years have passed since the 1971 Bangladesh War of Independence, a conflict that changed the geopolitical shape of South Asia, and ended with Bangladesh emerging as an independent nation.

The war was sparked by the then-West Pakistani administration launching military operations against a growing independence movement in East Pakistan.

The brutal conflict involved atrocities against the civilian population by the Pakistan Army and eventually drew in the overwhelming military force of neighbouring India. Bangladeshi militia during the War of Liberation in 1971/ photo Wikimedia

While Bangladesh gained its freedom, the following twenty years were hugely disruptive, with famine and a number of political coups, culminating in a popular uprising in 1991.

Despite the challenges, Bangladesh’s economic growth performance in the last 15 years has been remarkable and Bangladesh has continued to emerge in South Asia, showing the highest growth rates in the region.

According to data from the World Bank, real GDP in Bangladesh grew by 7.9 percent in 2018, and 8.2 percent in 2019. These are fascinating figures.

New and updated data from the Penn World Table puts these high growth rates into perspective.

As the graph below shows, 1978 marks the take-off year for China and 1986 marks the beginning of the economic reforms in Vietnam.

Source: This figure is based on the data from Penn World Table version 9.1.

Note: Adapted from Barker and Ungor (2019, Figure 1) with updated data.

Both China and Vietnam showed very high growth rates in the years following their take-off years.

In 2005, Bangladesh was included in Goldman Sachs’ Next Eleven. This was a group of eleven countries (Bangladesh, Egypt, Indonesia, Iran, Mexico, Nigeria, Pakistan, Philippines, South Korea, Turkey, and Vietnam) believed to have the greatest potential to become the next group of major economies in the 21st century, based on a set of indicators, such as education and demographics.

In an op-ed article published in 2018, Kaushik Basu, a former chief economist of the World Bank and chief economic adviser to the Government of India, discussed the implementation and promotion of inclusive policies, the empowerment of women, and the success of the country’s garment manufacturing industry as among the reasons behind Bangladesh's impressive economic growth. 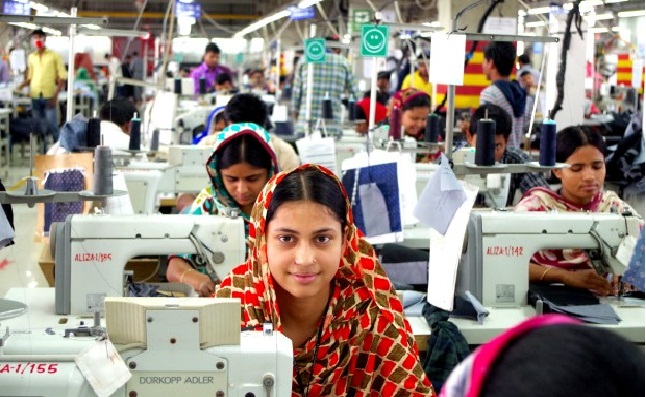 Clothing manufacturing has been a major part of the Bangladesh success story, and the majority of garment factory workers in Bangladesh are female.

In an influential study published in the Journal of Development Economics, Rachel Heath and Mushfiq Mobarak argue that the garment industry has likely played a key role in the progress Bangladesh has made in improving women’s lives.

Their quantitative analysis shows that the rise of the garment industry can in part explain female's increasing age at marriage and a rapid increase in female educational attainment in Bangladesh over the last three decades.

Bangladesh’s catching-up process started from a very low base.

Although Bangladesh has seen wide improvements in health, education, infant mortality, and life, the current standard of living indicators are still a considerable distance from those in advanced countries.

The World Bank recently released the Human Capital Index 2020. The HCI index ranges between 0 and 1, meaning that for a country where a child born today can reasonably expect to achieve full health and full educational achievement (meaning no stunting, 100 percent adult survival, and 14 years of high-quality school by age 18) will score a value of 1 on the index.

The index is sourced from 174 countries, and it ranges from 0.29 in Central African Republic to 0.88 in Singapore. Developed Asian economies dominate the rankings, with Hong Kong (0.81), Japan (0.80), and South Korea (0.80) following Singapore.

If a country has a score of 0.50, then aggregate productivity could be twice as high if the country reached the benchmark of complete education and full health.

In Bangladesh, a child who starts school at age four can expect to complete 10.2 years of school by age 18, but once what children actually learn is factored in, expected years of school reduces to only 6 years. 97 out of 100 children born in Bangladesh survive to age five and 31 out of 100 children are stunted, and so are at risk of cognitive and physical limitations that can last a lifetime. Across Bangladesh, 87 percent of 15-year olds will now survive until age 60.

These are sobering statistics, but the trends seem obvious in Bangladesh. New Zealand Foreign Affairs & Trade has this to say regarding the country’s relationship with Bangladesh: “New Zealand and Bangladesh have a friendly relationship. Our contact is mostly concentrated around meetings of the Commonwealth and the United Nations but there are an increasing number of points of engagement. Our trade relationship is growing, with increased demand for New Zealand milk powder in Bangladesh. We share a love of cricket, and compete frequently in international matches and tours.”

In my view, this is simply not enough.

It is important for New Zealand to develop new bilateral and multilateral agreements. One option would be a bilateral FTA with Bangladesh.

Bangladesh is unfortunately not part of the Regional Comprehensive Economic Partnership signed by New Zealand and 14 other Asian nations in November 2020.

But the country continues to develop, prosper, and look to the region for new markets and partnerships. New Zealand would do well to further investigate how ties with Bangladesh could be improved.

I share his views and argue that his suggestions are also valid for fostering the potential that lies in the further development of New Zealand-Bangladesh relations.

The views expressed are those of the author.

News
Bangladeshgeneralelection
Some 104 million voters will head to polling stations in Bangladesh on 30 December 2018. More >
by Opinion
BRI:HowNZcanaddvalue
Jason Young: As the BRI has a focus on the Pacific, NZ could add value by working with China to coordinate and facilitate regional development. More >
by Jason Young