Director of the Centre for Strategic Studies, Victoria University of Wellington

This week sees the end of Shinzo Abe’s remarkable second term as Prime Minister of Japan.

When he resigned in 2007 after a scandal-plagued year as PM, few would have imagined that he would return to power five years later and go on to be Japan’s longest serving prime minister and one of the region’s leading statesmen.

Abe’s international legacy will be to have steered Japan through turbulent times in the region, navigating between what Michael Fullilove has called ‘a feckless America and a reckless China’.

From the outset, Abe was clear in his ambitions. He told a Washington audience in 2013 “I am back and so shall Japan be.” Abe wanted to fashion a Japan that could lead and be a ‘rule maker’ as well as a ‘rule taker’. He wanted to prove that reports of Japan’s demise were exaggerated and that it ‘is not and never will be a tier-two country’.

While he didn’t achieve all his goals, Abe’s leadership marked the return of a more confident Japan, a respected leader in regional diplomacy.

Management of the US relationship is a perennial concern for Tokyo and Abe took a deep interest in it. While he never enjoyed a particularly warm personal rapport with Barack Obama, they worked effectively to strengthen the bilateral alliance, including making clear in 2014 that the US security guarantee applied to the disputed Senkaku/Diaoyu islands.

Their time in office also provided some powerful symbols of reconciliation. Obama became the first US president to visit Hiroshima in May 2016 and a few months later Abe was the first Japanese leader in more than sixty years to pay his respects at Pearl Harbor.

But it was the surprise election of Donald Trump in 2016 that provided the Japanese prime minister with one of his greatest challenges. Abe courted Trump, quickly recognising the importance of personal diplomacy to the new president.

Just a week after the election Abe was the first world leader to meet the president-elect at Trump Tower in New York. It was the first of more than 20 meetings, numerous golf games and countless phone calls between the two that would see the Japanese prime minister become an important influence on the unpredictable president.

The investment proved a good one for Japan. North Korean missile launches while Abe was visiting Trump at Mar-a-Lago in 2017 led to a strong statement of support for the US-Japan alliance.

When Trump visited Japan in 2019 he described the alliance as ‘steadfast and ironclad’. Abe seemed better able than most to deflect the president’s complaints about trade and the funding of US forces. He also proved Tokyo could lead, getting the US to adopt the language and much of the substance of the Japanese vision of a ‘Free and Open Indo-Pacific’.

A more assertive China under the leadership of Xi Jinping presented a different sort of challenge. Abe returned to the prime minister’s office in 2012 as tensions between the Chinese and Japanese militaries were growing, after Chinese maritime vessels began to regularly patrol disputed islands in the East China Sea. Abe responded with a series of defence, economic and diplomatic initiatives, including reinterpreting the constitution to allow the Japanese Self Defence Force to support the US in collective self-defence. 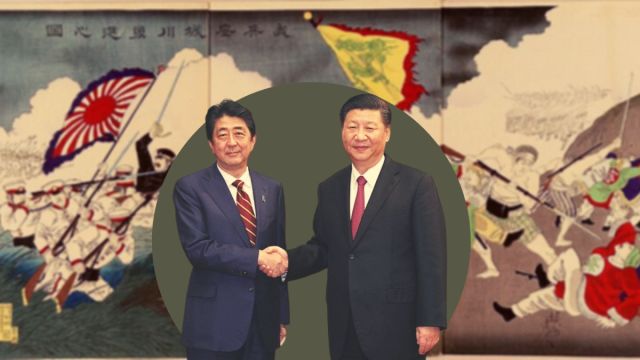 But Abe took a pragmatic approach to ties with Beijing, even as Sino-US relations plunged to a new low. He was resolute in standing up for Japanese interests but also looked for opportunities to engage, realising that, like it or not, geography had made Japan and China ‘eternal neighbours’.

The rise of China also provided context for Abe’s proactive diplomacy in Southeast Asia and his outreach to India. Under his leadership Japan built deeper relationships across ASEAN, including closer security ties with the Philippines and Vietnam. Tokyo remained a key aid donor and preferred development partner.

For all the hype around China’s Belt and Road Initiative, Japanese infrastructure projects in the six biggest Southeast Asian countries dwarfed their Chinese counterparts. Abe transformed the relationship with New Delhi, agreeing a ‘Special and Strategic Global Partnership’ that saw cooperation expand on everything from civilian nuclear energy to transportation and maritime security. The Japanese navy became a regular participant in exercises with India, Australia and the United States.

Perhaps Abe’s greatest accomplishment was his role in saving the Trans-Pacific Partnership. When the United States walked away from the deal in early 2017, the fate of the agreement hung in the balance. Abe lobbied Trump, trying to explain how the deal was in the US interests, but when that failed, he pressed ahead to forge what became the Comprehensive and Progressive Trans-Pacific Partnership (CPTPP).

As protectionism spread around the globe, Japan bucked the trend. In 2018 it concluded an Economic Partnership Agreement with the European Union and just as Abe was leaving office, Japan became the UK’s first post-Brexit trade partner.

In announcing his resignation, Abe apologetically touched on three areas where he had fallen short of his goals. A peace treaty with Russia that would resolve the Northern Territories issue remained elusive, with most observers putting the blame on a lack of sincere engagement from Vladimir Putin.

Nor was he able to resolve the case of Japanese citizens abducted by North Korea, although he did raise the profile of the issue by getting President Trump to meet with abductees’ families.

Finally, Abe failed in his long-standing goal to reform the Japanese constitution. His effort to insert language that would explicitly state that the Self Defence Forces were constitutional never found popular support.

Abe’s resignation will not have come as welcome news to the New Zealand government.

After years of frictions over issues like whaling and trade access, the two countries have deepened ties since 2017.  Abe’s leadership on TPP, his vision of an inclusive, rules-based Indo-Pacific and his willingness to push domestic economic reform, especially in agriculture, all marked him out as an important partner for New Zealand at a time of strategic uncertainty.

His successor, former Chief Cabinet Secretary Yoshihide Suga, has signalled a desire for continuity but whether he will be able to maintain the profile Abe gave Japan as a global and regional actor remains to be seen.