Japanese Prime Minister Shinzo Abe made history by becoming the country’s longest-serving political leader in late November. His 2,887th day in office surpassed Tara Katsura’s record set more than a century earlier.  So, what has Abe achieved nationally, and how has the Japan-New Zealand relationship evolved under his tenure?

Shinzo Abe’s long-held goal of revising Japan’s pacifist constitution remains unrealised. Now seven years into his second stint as Prime Minister, revising the constitution, which has remained unchanged since it was enacted in 1947, has yet to happen, meaning Japan is still without a full-fledged military.

The constitutional change will remain a focus for Abe before his third term ends in September 2021. A fourth term remains a possibility, but that decision is well down the track. If he remains as Prime Minister until his term expires in 2021, he will have led his country for more than 3,500 days.

Abe is quoted as saying his other priorities include “stopping the deflationary spiral, taking on the challenge of a declining and greying population and resolving post-war foreign policy problems".

Abe’s first tenure began in September 2006, when he became Japan’s youngest Prime Minister, at 52. But he resigned after only one year due to health problems and embroiled by scandal. He returned to the lead the Liberal Democratic Party in September 2012, when the Democratic Party of Japan was still in power, and in December that year took over as PM again after the LDP regained power.

Abe’s constituents, however, appear more focussed on economic and social security issues than he appears to be. That’s important because in order to change the constitution the Prime Minister needs approval by two-thirds of both houses of parliament, and a majority in a national referendum.

Despite only halting progress and a spate of scandals, Abe’s leadership skills and focus on the economy have countered opponents’ claims of cronyism and an ever-widening gap between the haves and the have-nots.

Setbacks have seen two ministers quitting in close succession following a Cabinet reshuffle in September and Abe stands accused of violating election laws relating to a dinner party hosted on the eve of an annual cherry blossom event.

Another challenge facing Abe is Japan’s relationship with South Korea, which is increasingly strained as both countries remain at odds over their bitter wartime legacy.

Tadashi Iwami, a Lecturer of International Relations at the Institute of the Pacific United New Zealand, Palmerston North, writes of significant developments in the relationship between New Zealand and Japan under Abe’s leadership.

Despite ups and downs, both countries displayed leadership during the concluding negotiations for the Comprehensive and Progressive Trans-Pacific Partnership, the multilateral free trade agreement in the Asia-Pacific region.

Beyond the economic dimension, New Zealand and Japan have recently begun enhancing their bilateral security partnership to address security issues in the Pacific region. Following the opening of the Rugby World Cup in September, Prime Ministers Jacinda Ardern and Abe announced in a joint statement that both countries were committed to working together to help achieve their Pacific priorities.

Both leaders agreed this would be a combined effort between New Zealand’s “Pacific Reset” and Japan’s “Active, Opportunity-filled and Innovative (AOI) Future” initiatives. Priorities include enhancing rule-based order in the Asia-Pacific region, improving maritime security and promoting high-quality infrastructure investment.

Interestingly, AOI, when pronounced “A-O-I” in Japanese, can be translated into the colour “blue”. AOI/blue seems to be a buzzword among friends of Japan when talking about Asia-Pacific regional issues. In early November, the US, Australia and Japan agreed to establish a trilateral “Blue Dot Network” to help develop high-quality infrastructure in the Pacific region. The Blue Dot Network is seen by many as a counterbalance to China’s Belt and Road Initiative.

Enhancing their security partnership does not mean that Japan will become a military ally of New Zealand and vice versa overnight, or even in the long term. However, the recent development indicates both nations are becoming more proactive in working together to address a wide range of potential regional threats. These could include the emerging presence of China and its activities, which both countries view may challenge the rule-based international order.

The New Zealand-Japan bilateral relationship will continue to grow given existing economic and strategic ties, and the respective positive public perceptions towards each other – as borne out in the Asia New Zealand Foundation’s latest Perception of Asia Survey. The relationship should continue to grow given shared values and views regarding how the international community ought to be – rule-based, not power-based. 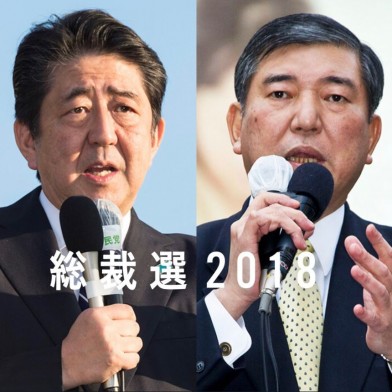 News
Expertviews:LDPelection
Japan’s ruling party, the Liberal Democratic Party (LDP), will be electing its next president at its leadership election on 20 September. More >
by