In early January, Thailand was the first to detect a case of COVID-19 outside China.

It did that primarily because it has one of the best public health systems in the region, and has done extensive research on the spread of past epidemics of viruses closely linked to COVID-19.

Dr. John MacArthur is the US Centre for Disease Control’s Thailand Country Director, based in Bangkok. Here, he discusses the CDC response to the COVID-19 pandemic in Southeast Asia and coordination efforts with national governments in the region.

How did the CDC come to be so involved in Thailand?

The US Centre for Disease Control and Prevention, or the CDC, has a longstanding commitment to the Asia Pacific region, with many bilateral relationships dating back decades.  We currently have offices in six of the 10 ASEAN member states, China, and Papua New Guinea, down in the Pacific Island nations, focusing on key capacities for vital health security:  workforce development, public health emergency management, national lab systems, and surveillance.  By surveillance, I mean monitoring and tracking the pattern of disease in those countries.

In Thailand, the CDC has its largest overseas operations, which began 40 years ago with the establishment of the first Field Epidemiology Training Programme outside of North America.

Over the years, we’ve worked with many host governments to build capacity, as well as to support the “ASEAN+3 Field Epidemiology Training Network".

Currently, graduates of these “disease-detective” programs are providing the leadership and the on-the-ground epidemiology expertise against COVID-19 in Asia. 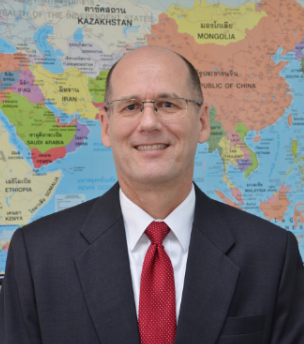 How can Southeast Asian nations best work multilaterally to deal with COVID-19 and prepare for the next viral event?

The region has seen a number of these diseases, and because of that, I think that really the countries have come together in a variety of multilateral forums to try to address this.

ASEAN has, increasingly over the last few decades, played an important role in health. So they have a health cluster, which within that health cluster has certain areas such as the ASEAN+3 network. They also have teams addressing issues about zoonotic diseases - the diseases that can be transmitted from animals to humans.

I think one of the benefits of these relationships is that they address issues both at the senior policy levels, but they also bring together technical experts. Relationships are also developed where they can pick up the phone and have conversations. And I’m seeing this in real time in Bangkok, where some of the neighbouring countries know of a patient who tested positive for COVID-19, but flew to a second country before they were able to be hospitalised — and those ASEAN networks can be alerted.

What is the current COVID-19 situation in neighbouring Myanmar ?

Last month I led a team into Myanmar with epidemiologists and points-of-entry migration experts, to work with the Ministry of Health and Sports.

We also worked with quarantine experts at major airports to improve the way they are screening returning Myanmar citizens, mostly migrant workers coming back from Thailand.

We actually have a CDC office in Yangon who works closely with the Ministry of Health and Sports to coordinate with the CDC in the US , as well as my office in Thailand.

One nation in Southeast Asia that seems to have some control of the epidemic is Vietnam, where a major public health programme has kept numbers down – how has the CDC been involved in Vietnam?

I think the CDC’s work on global health security really began, like much of our engagement on health security in the region, around the time of avian influenza in the early to mid-2000s. Vietnam was a country that was being hit hard by the bird flu, and so we strengthened our relationship with the ministry to work on key areas like testing, laboratory strengthening, and the development of a Field Epidemiology Training Program.

Our team in Hanoi is helping with testing,  data analysis, lab testing, and contact tracing.

Why are infection numbers in Vietnam so low?

The public health system in Vietnam is very strong. The government at the highest level took this seriously, and have really taken a whole-of-government approach to the response. I think that’s why we’re seeing some successes in Vietnam.

They had a political commitment early on at the highest level, and that commitment went from the central level all the way down to the hamlet level.

They also were open to outside technical advisers such as the CDC and WHO, and they worked, listening to the advice from experts from different organizations …and there was a feeling that that was beneficial.

What work is the CDC doing in Southeast Asia looking at the spread of COVID-19 from animals to humans ?

Within our health security team in the CDC office, we have a “One Health” team. It's really bringing together human health, animal health, and environmental health in a more - sort of cohesive - fashion. The  “One Health” team is working with a variety of different partners both in Thailand and in the region, at the academic level, at the government level, at the UN level to try to bring together approaches.

I would say that one of the main activities that they’ve been doing up until this point was really looking at testing for avian influenza, that exists in poultry mostly, but it potentially can jump the species barrier and infect humans - this region has a long history of new influenza viruses really affecting humans that have originated in poultry.

Up until early January, there was not any work going on with regards to COVID-19 because we hadn’t looked at it.  But while we don’t really understand where this virus came from, if we look at the genetic sequence of the virus, we understand it’s closely related to coronaviruses that exist in bats. And so we’re trying to set up a surveillance testing system not only in Thailand, but possibly throughout the region, to look closer at the bat viruses, and get an earlier indication of the presence of these types of viruses, before they jump from animals into humans.

How has the CDC been able to co-ordinate with the Thai government on its COVID-19 response?’

Over the last 20 years, we’ve worked hand-in-glove with the Health ministry to further strengthen their lab systems and their ability to manage public health emergencies. We’ve also got a specialized team on global migration and quarantine who worked with the Thais in strengthening at all points of border entry, screening for a variety of infectious diseases.

Thailand had four of the top 20 sites of Wuhan tourists coming to the country, so the Thai ministry set up point of entry screening at the airports where visitors from Wuhan were coming in and, in fact, detected one of the first cases of COVID-19 outside China on January 8.

They did a very good job at containing the disease, and then,they brought in a lockdown — shutting down restaurants and bars, closing schools, closing malls, not allowing large gatherings. Opinion
AviewonCOVID-19fromHongKong
As the global response to COVID-19 ramps up, the Asia Media Centre takes a look at Kiwis on the ground in Asia. Here's Fran Chen in Hong Kong. More >
by Francine Chen