Jamin Jamieson is a project manager for government publishing in Singapore. He has studied and lived in Singapore for the past eight years, specializing in Singapore-New Zealand projects for tourism.

Large industrial estates in the corners of Singapore have housed armies of unskilled labourers for decades, powering the growth of Singapore’s rapid ascent into one of Asia’s four tigers. While thankfully deaths have been incredibly low, the outbreak in this separate community of Singapore has opened a debate about the city-state’s reliance on migrant labour.

Almost all of Singapore’s COVID-19 infections have developed in migrant worker dormitories.

Fueled by domestic anxiety over Singapore’s future in the post-COVID world, some Singaporeans have openly called for the government to reduce the amount of migrant labourers in Singapore, and questioned whether these jobs can be filed by Singaporeans instead.

In response, Minister for Trade and Industry of Singapore, Chan Chun Sing posed to the nation: ‘Is Singapore prepared to have 2,500 babies born here every year grow up to be construction workers?’

The Minister’s response is an accurate response to calls for change. Currently, very few babies born in Singapore grow up to be construction workers – should this change? For the most part, the Singapore economic miracle has managed to keep Singaporeans in high-income or service sector occupations, allowing Singapore’s train stations, stadiums and state enterprise to be built by affordable migrant labour.

But it has not always been so. Singaporeans have already done the hard yards of history of building themselves up. Like most Asian nations in the second half of the twentieth century, Singapore put its pioneers to work on delivering output at pace.

Well remembered are Singapore’s factory superwomen who worked hard to secure Singapore’s uncertain future. The rapid transition from Third World To First has eliminated the Singapore master craftsman in favour of the financial services professional.

As the birth rate took a steep dive in the 1990's, reliance on migrant workers became increasingly important for Singaporeans to enjoy their hard earned lifestyles. 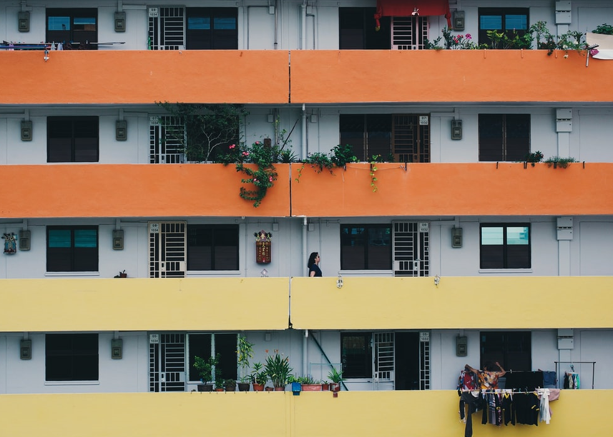 Since then, Singapore has enjoyed the fruits of this labour. Hundreds of thousands of ‘Work Pass’ and ‘S-Pass’ holders, mostly South Asian, Southeast Asian and Chinese men come to Singapore to work as unskilled labourers on construction sites, toiling under the sun and sending most of their earned income home to their families.

For most, it is a win-win situation. Singaporeans are able to focus on building careers, families, and capital, while migrant workers are able to do the same while working abroad and remitting money home.

But the construction sector’s mishaps have increasingly caught public scrutiny. Even before the novel coronavirus swept through dormitories infecting swathes of workers, stories of cramped conditions, overflowing toilets, and withheld pay highlighted the difficulty in dealing with such a large impermanent labour force.

Previously unprotected by the Singapore state in matters legal and medical, the foreign workers’ destitution is often cited as a reason behind Singapore’s second-ever riot, instigated by the death of an Indian construction worker run over by a bus on a Sunday afternoon (the one ‘off-day’ per week) in the migrant worker hotspot of Little India.

Additional buffers like the threat of summary deportation and no path to residency have left the win-win situation souring quickly in the face of Covid-19.

Yet, during the outbreak, the Singapore Government has constructed special facilities to house healthy workers and paid for the medical expenses of the infected.

Many migrant workers have taken to social media to express their admiration and thanks to Singapore during the isolation period, but the debate rages on regarding the humanitarian and economic issues, and also the need to overhaul the construction sector, and reduce reliance on foreign workers. Little India, where many migrant workers spend their day off / photo Unsplash

The government has already adopted measures to curb the number of migrant workers coming in, while focusing on automating processes to encourage growth in high-tech industries that will see more Singaporeans directly employed within the construction sector. For some, this future is too far off.

It is a bold proposal. with Singaporeans fiercely encouraged to pursue university education, most can scarcely imagine the thought of becoming a ‘tradie’.

The Minister is right in his reading that he cannot yet see who will want their child to grow up and become one.

But can this mindset change if Singapore reconsiders how they value labourers?

Ho Kwon Ping  is Executive Chairman of Banyan Tree , the hotel and resort company that has built properties in Australia, Thailand, New Zealand and Singapore.

Ho argues that Singapore has struggled to ‘bite the bullet’ and accept that cheap labour might not always be the most efficient option.

In the 1980s, Singaporeans flocked to high-income industries as the government encouraged a service-oriented economy, where they now have too many lawyers.

"We've had construction development experience in Australia, New Zealand, Thailand and so on" he said.

"When we built our hotel in New Zealand we were shocked because the number of workers we engaged there was about 10 percent of what we would get in Thailand -- because they are well trained,"

Trade and Industry Minister Chan argues that Singapore is a very small population: “For a small country without natural resources, we compete on the basis that we are a good place for people to do business" he said.

"If we lose out in that relative game compared to other people, then unfortunately, I think the future of Singapore will not be what we expect it to be."

As thousands of graduates struggle to find jobs even with competitive qualifications, many Singaporeans beg the question, might they be too proud to make construction work, work? 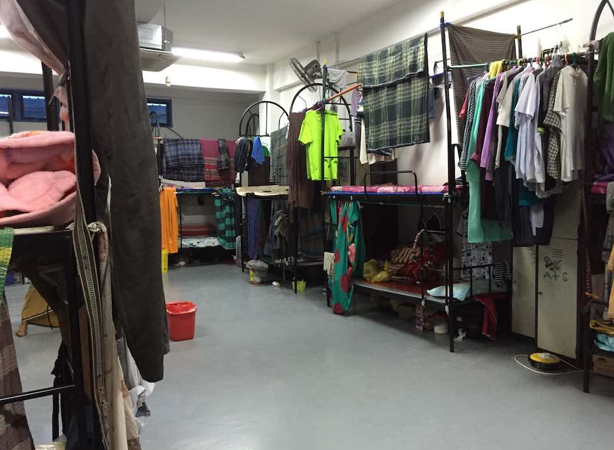 Some industry commentators have noted it would only cost 50% more to hire a Singaporean for the same job, while it would cost next to nothing to train them to a higher level under the government education system.

Minister Chan’s own defence of the country's reliance on foreign labour is perhaps understandable. The scale is truly massive.

While the Singapore government will not reveal the true number of non-citizens in the country, the work pass holders are known to be in the hundreds of thousands. There are simply not enough Singaporeans to replace them, even if they were three times as efficient. 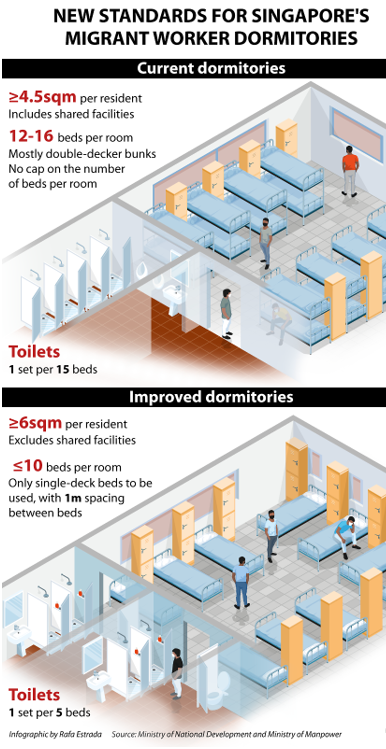 Yet, there are some moves towards developing a domestic skilled workforce.

The government is going to slash thousands of foreign jobs in the construction and shipyard sectors, and repurpose these trades for Singaporeans.

Construction magnate Jack Sim has suggested: “The first important thing is to change the mindset in our decision-makers, that we can localize a good portion of the construction workforce if we focus on respecting craftsmanship, and pay good wages" he said .

With no new migrant workers able to enter Singapore for some time, the country has an opportunity to reconsider the future for its domestic workforce.

Most likely, it will be a middle road.

Foreign workers are not likely to disappear from Singapore, but we are going to see government-led initiatives that promote efficiency in the construction sector, spearheaded by Singaporeans whose technological and automation expertise will increase efficiencies.

In the meantime, the Singaporean government has committed to new standards that will increase the safety and sanitation of migrant worker dormitories – a move welcomed by advocacy groups as an appropriate response to the factors they believe caused the outbreak. 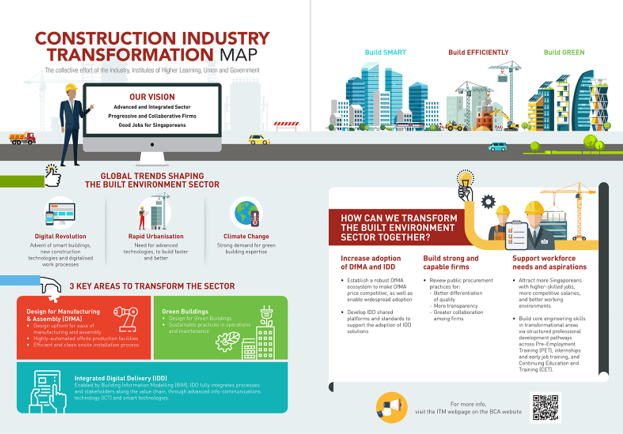 Understandably, the construction industry laments the rise in costs associated with these measures, as they face a 14% contraction in 2020

The Singapore government is not blind to these realities, even if they are only prompted by the pandemic. National Development Minister Lawrence Wong, Singapore’s face of national fortitude during the outbreak, knows there is work to do:

‘Companies will have to continue to push for automation in order to reduce reliance on migrant workers. I assure everyone in the industry that we will work closely with you to get through this difficult patch and to emerge stronger from this experience’ he said.

But the scepticism remains – will this mean fewer opportunities for Singaporeans?

Most Singaporeans have relied on state planning and social safety nets to make a good career. If opportunities open up in construction, it remains to be seen if they will be at the expense of less migrant labour.