Like a Bollywood classic, Crazy Rich Asians opened across the globe to dizzying anticipation. It became a soaring box office hit in the first week of release.

The film may have generated hype in the US for its impact on Asian-American representation in Hollywood, but reviews ran a little chillier in Singapore, the primary setting for the story, likely because of the prevalence of American-Asian casting.

Crazy Rich Asians is a ground-breaking retelling of the ‘Cinderella/Pride and Prejudice’ story, only with much more product placement. The film turns the tables on racial representation, with non-Asians playing only the most minor roles. Not since 1993’s The Joy Luck Club has there been such an Asian-centric story coming out of Hollywood.

So what of New Zealand’s treatment of its own prodigious Asian talent? How are high-profile Asian actors faring? According to directors such as Roseanne Liang, the issue of lack of representation on screen is all too familiar, and the reason why talent often heads offshore.

Here are some New Zealanders with Asian heritage who are making waves internationally. Augusta Xu-Holland was born in Auckland in 1991 to a Chinese father and Pākehā mother.

Beijing-based Xu-Holland broke into the China-Hollywood film-making industry as a foreign actor working in China. Most recent roles include Catherine Standish in the 2016 film On Wings of Eagles opposite Joseph Fiennes (Eric Liddell) and in The Last Race opposite Zach Ireland, where she found her dual ethnicity an advantage.

She has been cast as Pudding in the upcoming film Meta Area, Chanyang Yin in Special Mission, and Eva Li in Eight Hundred.

Tang is a New Zealand-born Chinese-Vietnamese actor. She studied Communications at AUT and speaks fluent Cantonese and Mandarin.

At 16, Tang made waves as Spit in Michael Bennett’s award-winning feature film Matariki. She was the lead in the television comedy Hounds, which won best TV comedy series at the 2012 New Zealand Film and Television Awards.

She’s had notable screen roles in Power Rangers, The Almighty Johnsons and Cherry, and a major supporting role in the TV drama Filthy Rich.

Tang was cast in the highly-anticipated Australian comedy series The Letdown, her major Australian screen debut.

Michelle Ang is a film and TV actress currently based in New York City. She was born in Christchurch to Malaysian-Chinese parents, and did a double degree in law and chemistry at the Victoria University of Wellington.

Ang first made her name in New Zealand’s teen hit series Tribe and Xena: Warrior Princess. She is known for her work on the long-running Australian TV series Neighbours, where she was nominated for a Logie, and for her role in New Zealand’s Outrageous Fortune.

Ang won Best Actress (Feature) at the 2011 New Zealand Film and Television Awards for My Wedding and Other Secrets directed by Roseanne Liang.

Her international film work has screened across the globe, and she has won awards including those at Berlin and Sundance.

She has appeared in The Beaver directed by Jodie Foster, Big Momma’s House, Like Father Like Son, and was the lead in the 2012 MTV scripted series Underemployed by Emmy-nominated writer Craig Wright.

She starred as the mother of Tui in the first season of the mini-television BBC series Top of the Lake directed by Oscar-winner Jane Campion. China-born Yoson An immigrated to New Zealand at a young age. He worked in theatre, most notably with Proudly Asian Theatre, before breaking into the New Zealand screen industry in 2012 in the short film Death Note, followed by roles in Director Roseanne Liang’s hit webseries Flat3.

Highlights in television include the HBO Asian miniseries Grace, and in 2017 he played the series lead Charlie in the new SBS crime-thriller Dead Lucky, opposite Rachel Griffiths.

It was announced this year that An would play the love interest in the big-budget Hollywood remake of Mulan directed by Nicki Caro.

JJ Fong’s roles include Alice Lee in the New Zealand television show Go Girls, and Betty in Step Dave. In 2016, Fong was cast in the role of Filipino-New Zealander and cosmetic surgical nurse Ruby Florez on Shortland Street.

Fong co-owns the production company Flat3 with friends Roseanne Liang, Prelina Lau and Ally Xue, and is known for her role as Jessica in the web series Flat3, Friday Night Bites and K-Road Stories.

Fong is currently in Hollywood following up roles in film, so watch this space.

Huang has produced and acted in PAT produced Black Tree Bridge and recently won Playmarket’s ‘Asian Ink’ for her ground-breaking new play Orientation, which challenges the desexualisation of Asian men.

Her play Call of the Sparrows (The Herald Theatre, 2016) was part of the Auckland Diversity Project Fund. Huang will direct Like Sex, by award-winning Chinese-New Zealander Nathan Joe at The Basement this year.

Credits include The Mooncake and The Kumara (Auckland Art’s Festival and tour), Call of The Sparrows (Herald Theatre), Find Me a Māori Bride, The Last Man on Earth is Trapped in a Supermarket (Q Theatre).

In October this year, the New Zealand Film Commission will be holding a hui focused on Asian actors and practitioners in the New Zealand film industry – similar to the event they held 18 months ago for their engagement with Māori communities.

“It’s fantastic to have such visible representation [on screen]. It’s important just to have visibility, it shows that the diversity policy is working.”

“They have an existing understanding of Kiwi culture. Having hands-on experience is valuable and often overlooked.” 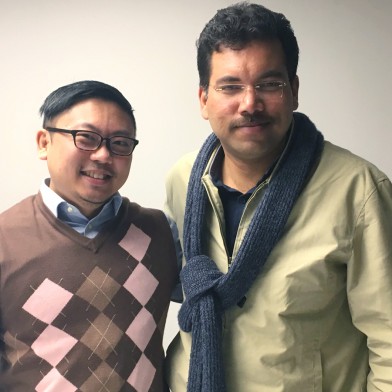