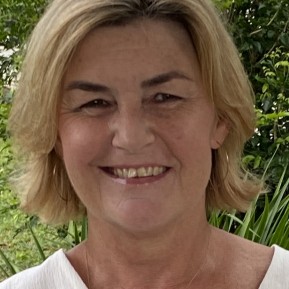 Rochelle Angus is a New Zealander who left on a very belated gap year around Asia in 1999 and hasn’t quite made it home yet.

In a country similar in size to Lake Taupo, with a population slightly higher than NZ’s, it’s not surprising that Singapore’s skyline is full of high-rise buildings for both working and living.  Referred to as an “HDB” (taken from the name of the public housing authority – the Housing Development Board), these high-rise flat complexes are one of the most recognised aspects of Singapore living.

The HDB is a great source of pride to many in Singapore and is unique in that almost 80 percent of the population live in one. Although considered public housing, nearly 90 percent of residents own their home.  They are spread across 24 towns - often referred to as the ‘Heartlands’.  The intention is a quality living environment for all, with various commercial, recreational, and social amenities nearby for the residents’ convenience. 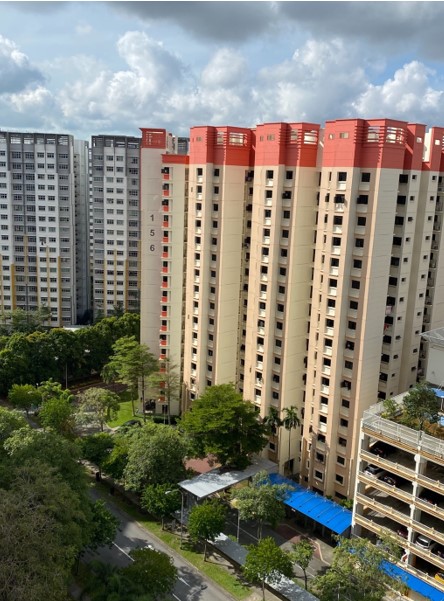 View from top floor of a Sengkang HDB | Photo: Supplied

The mix of ethnicities (Chinese, Malay, Indian and other) in an HDB estate is balanced by government quotas to promote racial integration and harmony, and to prevent the forming of racial enclaves (which had been a problem in the 60’s).  With family seen as the basic building block of society, flats cater to multi-generational and nuclear families – if single you are only eligible after the age of 35.

I caught up with my friend Ann who lives in an HDB and was happy to show me around her flat and complex.   Ann lives in Sengkang which is in the North-East of Singapore, a 25-minute drive from Orchard Road.  As a town it is about 25 years old, making it one of the newer ones,  and it is the second densest area in Singapore (250k population in roughly 10 sq km).  It feels like there are HDB blocks for as far as the eye can see – I think there probably are!

Ann moved here from a condo after her divorce 7 years ago and lives with her daughter.  She was happy to share she paid approximately NZD $425k at the time.  Ann personally thinks it is a fantastic set up – she feels safe, she can get to the bus stop without needing an umbrella, all the amenities she needs are nearby, and she loves the access to the waterways and park connectors in her area. 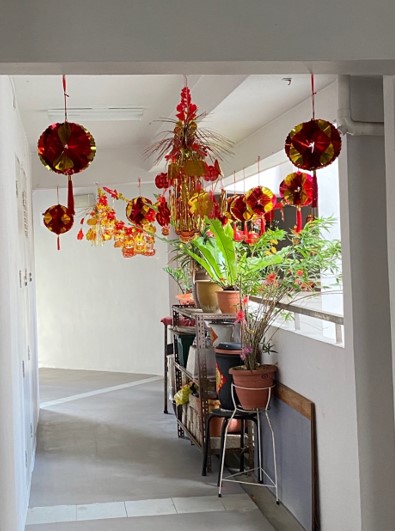 Leaving our shoes at the door – an Ikea shoe rack can be found at most entrances ­– we had a quick look around Ann’s “4-room” flat.  At approximately 90 sq m, it is a simple layout of kitchen, living/dining area, three bedrooms, two bathrooms, a service yard and storeroom (also the bomb shelter).  Ann loved the fact that she had a large window in the lounge and that her kitchen was bigger than her condo one.

“4-room” flats are the most common size of HDBs, housing up to six people.  Flat sizes range from 2 to 5 rooms as a standard.  A “5-room” still only has three bedrooms, but the living/dining is bigger, or it may incorporate a study.  Layout has changed little over the years; however open plan kitchens are the trend in the new builds.

Downstairs it's breezy and feels spacious, the density is not so obvious.  There are palm trees with plenty of tables and seating amongst them, and covered pavilions encourage social interaction and community bonding for all ages.  There is a badminton court, playground, community garden, and Chinese prayer burning bins dotted about the place.  There is always a medical clinic and hawker centre (traditional food court) nearby, and many complexes have childcare/elderly day care centres to help meet the needs of the residents. 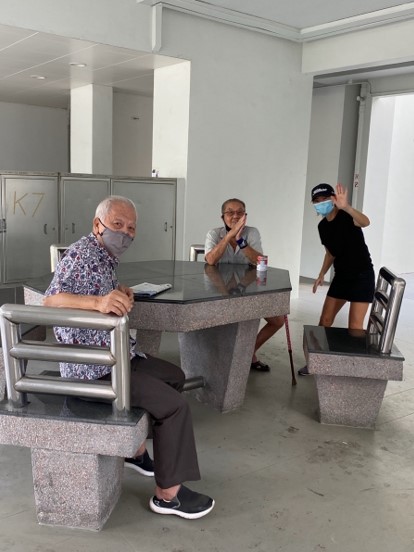 Talking to the uncles at the void deck in Ann’s HDB estate | Photo: Supplied

Void decks are an iconic feature of the HDB and refer to the ground floor which has been left open as a sheltered space for residents to use.   Void decks have had many uses.  Some of the main ones today include Chinese funerals, Malay weddings, and my favourite, a hangout spot for the uncles to have a cigarette and catch up with their mates.

The mama shops (meaning uncle in Tamil – named after the Indian businessmen who set them up originally), are small convenience stores of roughly 9 sq m.  While they can still be found across the island, they are starting to be replaced by mini-marts or supermarkets in many estates. 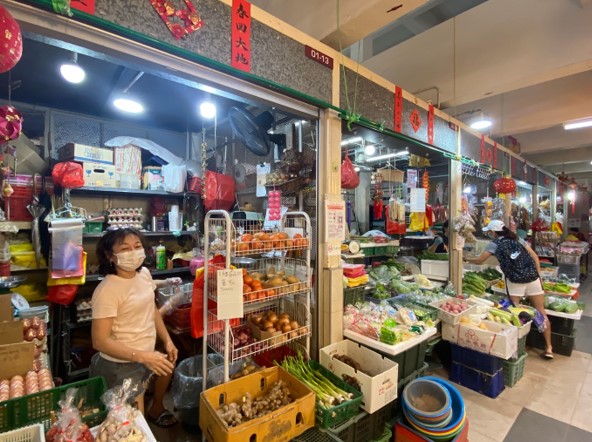 Soo Ching took over the running of this wet market stall from her father-in-law | Photo: Supplied

In the older estates, referred to as “established”, there is often still a wet market, numerous hawker stalls, a bird singing corner and many smaller shops catering to daily needs.  We visited Toa Payoh, which is the second oldest town.  We talked to many stall holders who have been operating for over 50 years or are the second generation.  It’s here you’ll also see the traditional laundry-hanging poles.

But what does the future hold?  23,000 more flats this year, and the same next year according to the HDB website.  With working from home becoming more common, the demand for larger flats to support this has increased.  “Smart enabled housing” precincts are underway, and there is a 10-year Green Towns Programme aimed to make HDB towns more sustainable and liveable. 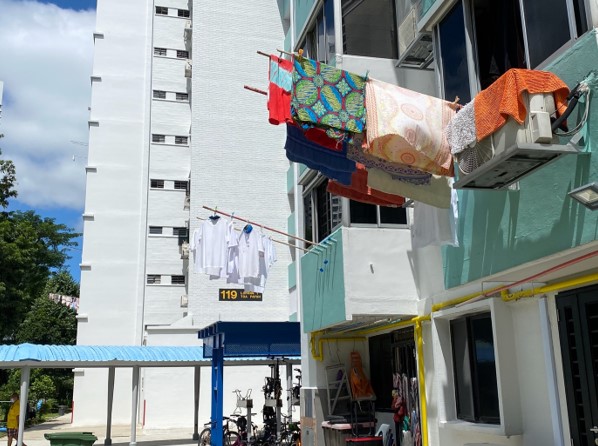 From an estimated 550,000 people living in semi-permanent shelters in squatter areas or overcrowded shophouses in the mid 60’s to around 1.09 million HDB flats today – the development is impressive.  So, are the people happy?  Very much so it would appear!  The HDB Living Experience Survey published last year reported 99 percent having a “sense of belonging to their towns and estates” and 96.9 percent “being happy with neighbourly relations”. “Fulfilling dreams, building homes, creating communities” is what I read on the hoarding of a new HDB development, and it appears that these estates are achieving just that.

With 80 percent of the population living in an HDB in land scarce Singapore, they will always be a prominent feature of the skyline. They’ll be greener, smarter, and hopefully will adapt to cater to the changing needs of the population, so everyone can be happy in the Heartlands. 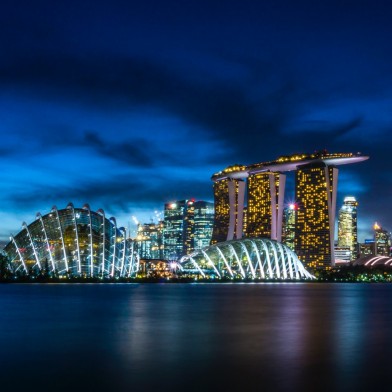 News
SingaporeandNZ:Fivethingstoknow
Prime Minister Jacinda Ardern is heading on her first international trip in two years to visit Singapore & Japan - here are five things to know about Singapore. More >
by 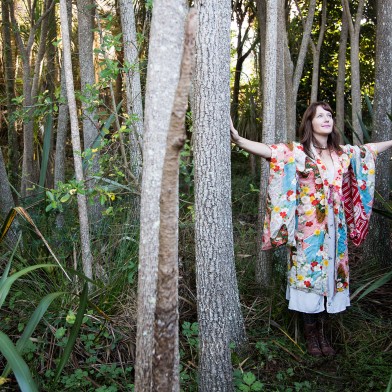 Features
Translatingplantscapes:XantheWhite
“When I selected these pieces of stone in a quarry in the hills outside Shanghai, Covid had already begun to change the world, although we didn't know it." More >
by Lee Seabrook-Suckling 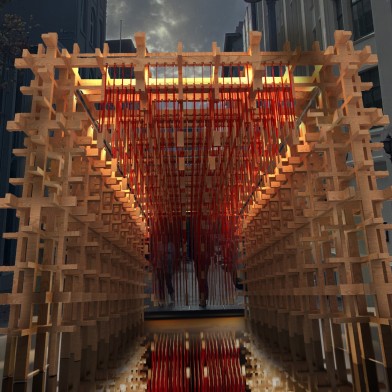