The U.S.-China trade war has escalated significantly since early 2018. The current pandemic adds distrust and confrontation to the increasingly fragile U.S.-China relationship. Global protectionism is on the rise as a result of the stand-off, and we are seeing a decoupling of the two largest economies in the world.

In the second of a three-part series based on a study of managerial perceptions of the U.S.-China trade war, researchers Hongzhi Gao and Monica Ren take a closer look how Trans-Tasman, and European businesses are responding.

Both Australia and New Zealand are heavily reliant on China for export earnings, and sourcing intermediate and consumer product supplies while the two countries maintain a strong political ties with the U.S.

Seeking a fine balance between export markets and sourcing locations has been on the minds of many executives of Australian and New Zealand firms.

To understand the impact of the trade war on Australian and New Zealand exporters, a research team comprising Associate Professor Hongzhi Gao, and researcher Ivy Guo from Victoria University of Wellington and Dr Monica Ren from Macquarie University, conducted interviews with sixteen managers from Australia, New Zealand, Germany and China between October and December 2019, looking at the impact of the trade war on exporters. These interviews aimed to capture original managerial insights into the trade war.

Several themes arose in the analysis of Australian and New Zealand managers’ perception , but primary among them was the blow to business confidence, as demand for products sourced from China in the U.S. fell away, and at the same time costs (including tariffs) of exporting to the U.S. were rising.

According to a health product company manager, the overall impact of the trade war was reshaping their company's attitudes towards exporting.

Falling demand for coal in China has seen Australia's export prices and revenues drop by about 30% in 2019.

One specialised equipment trader put it in a nutshell :  "I am pessimistic, and losing confidence in the long-term because knowing that the (coal mining) industry  at the global scale is in a downward spiral… In the coal mining sector, low prices mean low revenues; lower revenues mean reductions in production.”

A New Zealand-based shoe manufacturer explained to researchers that a constant lack of confidence from firms was a real concern.

“I think it's the insecurity that worries people, they are scared. That for us has a bigger impact than expected, it is quite interesting in the U.S. markets people talk about it a lot more. But, if you stop them and ask, “Ok, so why is [the trade war] impacting on our business?”,  they say ‘oh’, it has not changed the tariff at all for our product".

"So, in terms of supply chains there is no good reason why people should be worrying, but they are".

"The impact for us is more from the overall feeling, the perception that this is bad, and things are going bad, and it is going to get worse.”

While many managers did not express their preferences for either the U.S. and China being their favoured strategic export market or supplier, they had started to make moves to adjust markets and supply chains.

Specifically, some of those spoken to have started to move out of China in response to the domestic economic downturn.

“There are great changes, as the impact of the trade war on the Chinese economy has affected consumer confidence .. this is a very critical thing".

"Since we sell premium products, we no longer focus on China, but on Australia.. we also welcome buyers from other markets, but we won't actively chase them overseas as we did before.” In the coal mining industry, equipment manufacturers have begun to diversify their downstream supply chains away from China to locations like India and South-east Asia, reaching out to smaller customers they would otherwise not have focused on before the U.S.-China trade spat.

Staying neutral and highlighting a “Australian” or “New Zealand” country of origin, some companies are beginning to market their products in a way that emphasises "Australian-owned" , ‘Australian brand’ or ‘New Zealand Made’,  to avoid potential conflicts and trade barriers in some markets.

“In the United States, I think that not being a Chinese brand is a huge advantage.” said one manager.

These companies wanted to present themselves as independent & neutral suppliers from a third-party country as consistently as possible as the U.S.-China tensions continue.

Economic factors are a paramount concern, but managers are also closely watching the political risks and repercussions.

“We are very cautious while dealing with our clients from Iran. We are an Australian company, and we don’t want such interactions to create troubles to our future U.S. sales potential” admitted one manager.

Despite the fact that restrictions have been put in place and business has retracted during this period, businesses outside the U.S. and China can still find some gaps to enjoy business growth. Some managers saw the protectionist trend and associated political risks as a new “normal” they will just have to deal with in international business.

According to one Kiwi meat exporter, New Zealand continues to enjoy good access to both markets.

“So, there's positive and negative. We are finding that the fact that we're not American, and not Chinese, is a positive in a lot of parts of the world.

"Seems a little bit like being Swiss.” said one NZ-based manager.

“I think I'll just leave China and America to fight it out in their play-pen, and we'll just quietly benefit in the interim.”

Researchers found that some Australian and New Zealand respondents were concerned about the balanced nature of some global business supply chains.

Over recent decades, US and western firms have fought for the high ground in global value chains, seeking bigger profits and the ability to control the market.

But China has also taken the opportunity to fortify their industrial infrastructures and gradually move up in the value chain from low end to middle and even high end. As the trade war escalates, the U.S. and the West now have to face the fact that a hollowed-out manufacturing sector makes the high-end of the value chain extremely vulnerable to a global disruption at the lower end. 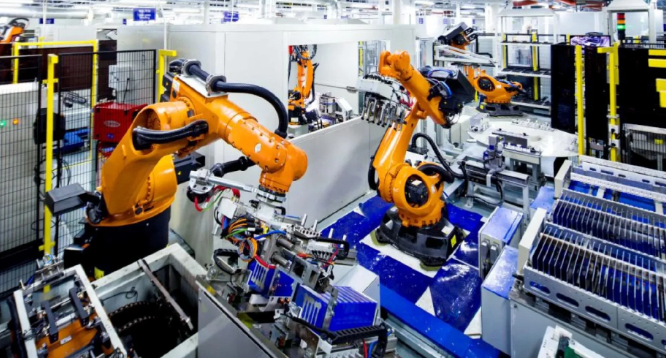 Robots are leading the way in Chinese manufacturing /photo CATL

Business managers spoken to by the research team revealed that the possible relocation of some manufacturing is now on the table for some firms in response to the trade war.

"We are seeing a lot of new chemical downstream investments going into places like Saudi Arabia, that have very good relations with the U.S., South Korea, I think it is also seeing a new influx of investments into the chemical industries" said one manager.

“And the U.S. is having a bit of renaissance in chemical production... I think the Environmental Protection Agency has something like 300 applications for new manufacturing facilities in the U.S.”

“But the longer-term structural changes towards China, whether it's the trade war or otherwise are definitely in progress, ...investments are definitely being looked at a little bit more seriously.”

“This trade war, even if people do believe it could be a short-term thing that might go. I'm thinking , well, maybe we should look outside of China…to diversify the risk...”

For those whose supply chain operations are relatively unscathed, the U.S.-China trade war has been seen as a signal to consider some proactive changes.

Responses from managers show many firms have responded to the trade war by diversifying their export markets and supply chains, retreating from China and becoming more focused on domestic markets, both in Europe, and Australasia .