“Connecting with communities is in my blood,” says Anusha Guler, the new Executive Director of the Office of Ethnic of Communities.

In the past 18 months, New Zealand’s ethnic communities have been through two upheavals.

The first, the shootings at Christchurch Mosque on 15 March gave rise to a period of national reflection and, along the way, to Anusha’s appointment.

The second, the COVID-19 pandemic, has changed the world in ways that will only become apparent over time.

For Anusha Guler, COVID-19 means that the Office’s immediate need is to renew its understanding of community concerns. 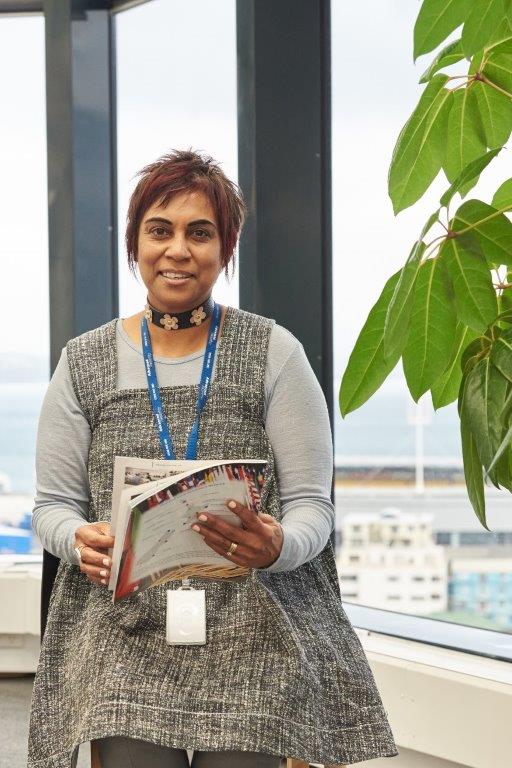 “I think we need to go back to our communities, and ask what are your priorities now." she says.

“We are hearing about migrants not being able to fend for themselves, about passport issues, about jobs, about funding... Whatever actions the Office chooses are going to be irrelevant if the community has different needs.”

Just a few weeks after she stepped into her role, and she is about to embark on an extended round of meetings and consultations.

Over lockdown, she saw out her time as Chief of Staff for the Wellington City Council. Her feet have barely touched the ground.

Anusha grew up in apartheid-era South Africa in a largely Indian community, which while part of a very divided society was highly cohesive.

“I was telling my leadership team that I grew up in an all-Indian area. I went to an all-Indian school. I celebrated Eid, Diwali, and Christmas, because for us it was just the one community.”

Her parents were of modest means and education. Anusha, with the help of loan taken out by her father, was the first person in her family to attend university.

When she emerged with an undergraduate degree, it was 1994 and apartheid was crumbling.

One benefit for Anusha, now that South Africa was no longer an international pariah, was more opportunities to study abroad.

Anusha applied for a scholarship to study towards a postgraduate degree in New Delhi, then hesitated.

On her return to South Africa, she took up a short-lived appointment as a select committee senior secretary.

“Within six months they moved me out of that; they said right, there’s a new constitution for South Africa, we need somebody to set up an upper house of parliament,” she says.

"It was a new South Africa  - we were starting from scratch."

"We were changing all of the legislation, removing all of the apartheid restrictions, and bringing in a democratic state. People wanted to engage with us. It was heartening to connect with communities.”

Anusha loved the job, but over time her life changed. She married a Turkish man and they planned a family. Crime rates in South Africa were high.

“He wasn’t used to that environment of bars and gates. As soon as my daughter was born, he said, ‘We are going to have to do something.’”

New Zealand, Australia, and Canada were their first-pick migration destinations.

New Zealand won out. “Based on qualifications, age and experience we qualified for residence almost immediately.”

“I have never regretted the decision,” she says.

The family moved to Auckland, where Anusha worked for Auckland University, but after the heady experience of creating democracy in South Africa, it felt a bit routine.

So the family moved to Christchurch, where Anusha became the Christchurch City Council’s Democracy Services Manager.

In her new role, among other things, she promoted electoral participation, involved the public in the process of decision-making, and supported councillors and board members to connect and engage with their communities.

The job meant coming to grips with the political complexities of local government, which, she says, are easily the match of central government.

“I loved my time in Christchurch. I was the governance lead for the merger of Banks Peninsula with Christchurch City, and I set up two community boards. It was so exciting – but it was all about me,” she says.

All was not well. Despite being well qualified, her husband had trouble finding employment locally. “It was even suggested he change his name,” says Anusha, incredulously.

He began commuting to a job in Auckland.

“I had a six year old who didn’t think her father was coming home again, “ says Anusha. “It didn’t work for him or her, so I made the conscious decision to move.”

She became the Team Manager, Finance and Governance with Auckland City Council

Her arrival coincided with the creation of the Royal Commission on Auckland Governance, which would report back in 2009, recommending the set-up of a ‘super city’.

She calls it “the best move I ever made. Because I positioned myself to be involved in the merger of nine councils into one.”

After extensive community consultation – including drawing on the then Office of Ethnic Affairs for help in engaging with Auckland’s ethnic communities – Auckland City Council began operating on 1 November 2010.

Anusha had barely time to catch her breath before the Wellington City Council came calling.

“My director took three months to persuade me to come to Wellington. I wasn’t looking for a job change.”

She advanced from Manager, Democratic Services to Head of Governance, to Chief of Staff, a role in which she found herself building Wellington’s relationships with its international sister cities.

Meanwhile, the Office of Ethnic Communities was going through troubled times.

The Office had appointed only two people in the role of Director since 2014, a situation leading to accusations of lack of leadership and direction.

An Acting Director was in place and recruitment was underway on March 15th 2019 ,when the Christchurch mosque terror attacks took place.

In the period of soul searching and recrimination that followed, one thing was agreed: New Zealand needed an effective, well-resourced Office of Ethnic Communities - although the government decided not to move ahead with suggestions to transform the office to a full-blown Ministry.

The budget was increased, staff numbers were upped from 24 staff to 42 (in Christchurch, the number of staff climbed from two to nine), the Executive Director of the Office was again made a direct report to the Chief Executive of the Department of Internal Affairs, and the Office embarked on a series of consultations with Muslim communities across the country, publishing the report "Conversations with Aotearoa New Zealand’s Muslim communities: Growing understanding after the Christchurch terror attacks"  in March 2019.

It was more than ever important that the new Executive Director be the right person.

Talking to Newsroom in July 2019, representatives from ethnic communities set out the qualities they wanted to see in the new Executive Director: someone with connection in the community; someone to be a role model for the young; someone with “backbone”.

Anusha’s appointment was announced in April 2020.

Internationally, migrants and ethnic communities have been deeply affected by the consequences of COVID-19.

Migrants are over-represented on the front line in sectors like health, aged care and hospitality. Often they are in jobs that are among the first to go during hard economic times. Some, who rely primarily on a first language other than English, find it difficult to access accurate information. Lacking local connections, they are at greater risk of isolation, and many will be worried about their friends and family overseas.

During lockdown, despite the absence of its new Executive Director, the Office of Ethnic Communities helped groups access the Ethnic Communities Development Fund, which was given additional funding and greater latitude in its funding criteria.

And, drawing on its community relationships, the Office produced videos in more than 20 languages addressing topics like ‘staying safe during Covid-19’, ‘life at level 2’ and ‘how to access government helplines’.

Under Anusha, the Office is now consolidating some of the work it did under lockdown by setting up a multilingual network, which will be used to translate and distribute resources .

Anusha points out that a number of District Health Boards are already making use of community-based translators.

“At the moment the network is in its initial stages. We’ve put out a call for expressions of interest to connect volunteers and translators before we get on to the next step of looking at key messages.”

To address the racism and xenophobia stirred up by misinformation around COVID-19, the Office and the Human Rights Commission have collaborated on the $1.3 million VOICE OF RACISM anti-racism campaign, fronted by Taika Waititi.

An ethnic data dashboard of ethnicity and ethnic groups across New Zealand is on the way.

“If you want to find out what’s the make-up of Hawke’s Bay or Dunedin you can drill down in this database.”

“It’s mainly aimed at other government agencies. We are saying, ‘When you are doing your policy, make sure it aligns with the communities you are delivering to.’”

Anusha is reaching out to other Government agencies to see how the Office can work with them. “My personal view is that we need a ‘New Zealand Inc.’ approach,” she says.

She is thinking about how the new staff members will be embedded as part of the team, and how they will work together collectively.

“My team have told me that they have been in a reactive space. It’s my job to support them and give them a long term view of where we are going and how we are going to get there.”

On her LinkedIn page she has posted an inspirational quote. “...every time I thought I was being rejected from something good I was actually being re-directed to something better”.

She knows she is fortunate. She has the staff, the funding, and the mandate to make a difference.

The work of the previous directors has given her a foundation to build on.

“I feel I have come full circle and I am exactly where I need to be,” she says.

This article first appeared in the October 2020 edition of Settlement ActioNZ, published by Immigration NZ . It appears here with permission.