Dangerous, chaotic and dodgy, that's often the picture of Indonesia painted by parts of the Australian media. Bali-based journalist Ian Neubauer says it's time the stereotypes were dropped.

In August, the Australian Broadcasting Corporation reported many of the estimated 7,000 Australian expats who'd sheltered in Bali during the pandemic would be “forced to leave, even though there are no international flights to the island.”

The report was based on an Indonesian government communique signaling the end of free visas for tourists.

But a second communique released days later explained how a new visa regime would make it possible for all foreigners to remain on the island for as little as US$35 per month: no foreigners would have to leave the country. But the ABC didn't catch the second communique. It also failed to put the story in a proper context by telling its audience about how accommodating Indonesia had been to foreigners during the pandemic. Instead, it created a narrative about panicked Australians stuck in the developing world during the pandemic.

A November report in the Australian media on a proposed law to ban alcohol in Indonesia provides yet another example of the relentless tide of negative bias of Australian reportage of Bali.

Published in tandem by Australia's two largest private news companies Fairfax and News Corp, this “booze ban” story was based on the brief resumption of deliberation in Indonesia's Parliament of a bill first tabled in 2015 – a bill Willy Aditya, deputy chair of Indonesia's House of Representatives, said does not have the level of support to make it into law. It was a non-story, but one that simply reinforced some Australians' suspicion and fear of Indonesia.

An Omnipoll in June 2019 commissioned by the Visit Indonesia Tourism Office in Australia found 50 percent of Australians have negative perceptions towards Bali.

The Lowy Institute poll earlier this year found Australians' trust in Indonesia to act responsibly in the world has fallen to 36 percent, its lowest point since the Sydney-based think tank began polling eight years ago.

“Australians continue to demonstrate a lack of knowledge about, and trust in, our largest neighbour, Indonesia,” said Lowy. 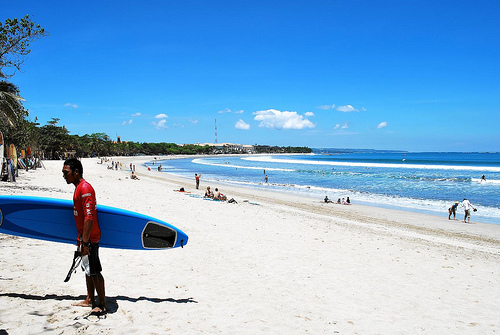 President of the Indonesia Institute Ross Taylor says the relationship between Australians and Balinese has been “very warm and family-like” for nearly 50 years. One in three Australians have visited Bali, including a record 1.23 million in 2019, making it the second-most popular foreign travel destination after New Zealand.

Taylor says the mistrust many Australians feel for Indonesia is “understandable” because “the media rarely shows interest in what is happening in Indonesia outside of Bali. And the thing they love covering most about Bali is the bad things that Australians do there. This narrative feeds into a really distorted perception of what Indonesia is all about.”

"The bias has flow-on effects: trust ratings, reduced investment, loss of Bahasa Indonesia in schools and Australian universities,” she says, pointing to a pending decision by La Trobe University to drop its Indonesian studies program because of lack of interest.

Murdoch University in Western Australia is also debating whether it should continue Indonesian language programmes at their campus in Perth.

Moves away from the study of Asian languages at Australian Universities have caused concern across Australia, with many critics warning that the country will be unprepared as relationships with its Asian neighbours develop in the coming decades.

Tulevski says Indonesia could encourage more well-balanced reportage by being more proactive and responsive when talking to Australian journalists.

Ross Taylor of the Indonesia Institute agrees, and suggests it needs to be a two-way street.

“On one side you have the Australian media dominated by suspicion, and on the Indonesian side it's ambivalence," he says.

"Put those two together and it gets very difficult - but our institute has been arguing for a long time that Indonesia could do a lot more to sell itself than it has in the past.”

Evi Fitriani is an international relations expert at the University of Indonesia. She believes there is little the Jakarta government can actually do.

“Even if Indonesia tried to counter some of the negative news, journalists often have their own agenda. I lived in Australia for five years and I rarely saw any good stories on the positive aspects of Indonesia. It was rarely mentioned,” she says. At this time of the year, tens of thousands of Australians and New Zealanders would normally be packing their bags for Bali.

To fill the void, tabloid media is having a field day with Bali 'ghost town' stories, generally showing photographs of empty streets and resorts taken at the start of the pandemic.

But with the resumption of domestic travel in Indonesia on July 31, Bali is no longer a ghost-town.

The island's main airport says it expects to see more than 380,000 tourist arrivals over the next month or so.

Nevertheless, Australia's Channel 9 and Seven West Media recently published another ghost-town story based on a video clip posted on Facebook by an Australian expat of an abandoned Kuta hotel “filled with rubbish and the lobby stripped bare, trashed and falling apart”.

The Bali Sun, a local news site, looked a little closer at the story and discovered the hotel wasn't abandoned. It had in fact been sold, and the new owners were beginning renovations.

“You can never trust Australian media. It is their job to make every story bigger than it is,” says Sebastian Marteau, general manager of the Karma Kandara beach club and luxury clifftop resort on Bali's Bukit Peninsula. “They say Bali is empty but our beach club was at full last weekend, and our villas are nearly sold out for December.”

Marteau says tabloid newspapers in the UK show the same negative bias when reporting on Spanish holidays islands like Majorca and Ibiza. “You either love Bali or you hate it, same with the British and Spain."

"They all go there on holidays and have a great time, but the media is always writing bad things about the place.”