It is no secret that Japan today still suffers sexism and gender disparity, and if the Tokyo 2020 Olympics don't go ahead,  new Japan Olympic Committee head Seiko Hashimoto's "failure" will most certainly one blamed on her gender, writes Rumi Sakamoto of Auckland University. Sakamoto is senior lecturer in Japanese Studies and an expert in Japanese national and cultural identity.

OPINION: It is no secret that Japan today still suffers sexism and gender disparity, despite the government’s often stated commitment to gender equality Japanese politicians’ sexist comments are so common that there is even a website for the most sexist remarks made by a politician each year.

So the latest addition to this litany by Mori Yoshiro, former Prime Minister of Japan and (then) head of the Tokyo Olympic organising committee, did not come as a surprise.

On 3 February, at a meeting of the Japan Olympic Committee (JOC), Mori suggested that women “talk too much” in board meetings. He also entertained the idea that it may be necessary to limit speaking time if the number of female board members were to increase. Incredulously, these remarks were made in response to the JOC’s goal to increase the proportion of female board members to over 40 percent.

In Japan, derogatory remarks about women made by men in positions of power are typically characterised as shitsugen (gaffe/slip of the tongue)—a term that implies a lapse of judgement rather than serious offense. After an apology and retraction, public anger usually fizzles out and things tend to carry on as they were.

This time it was different. Although Mori initially looked to continue in his role after a hastily put together press conference and the acceptance of his apology by the International Olympic Committee (IOC), a surge of domestic and international pressure forced him to resign nine days after the incident.

Two interrelated elements contributed: international pressure and social media. The Olympics being a major international event, Mori’s sexist remark was widely reported in overseas media. Women outside Japan quickly added their voices to those from within the country. On the day following Mori’s remark, for example, Canadian IOC member Hayley Wickenheiser tweeted “definitely going to corner this guy at the breakfast buffet”, while French politician Nathalie Loiseau posted another strongly worded tweet: “Yes, yes Mr. Mori. Women can be concise. For example, to respond to you, two words are sufficient: ‘shut up’”. Naomi Osaka commented Mori’s remark was “uninformed and a bit ignorant”. 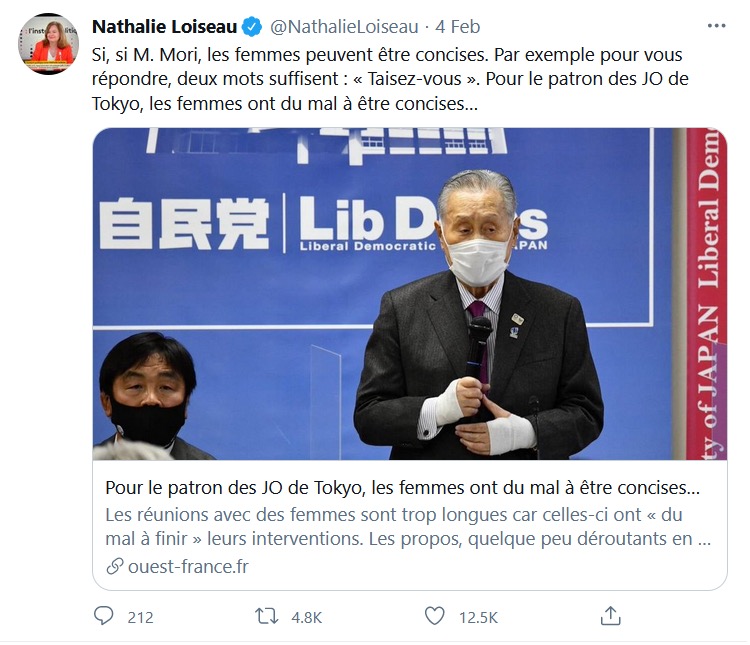 Hashtags #Mori Yoshiro shi wa intai shitakudasai (“Mr Mori please resign”) and #Wakimaenai onna (“Women who refuse to ‘understand their place’”) quickly trended and made their rounds on social media, spreading critical voices, asserting gender equality and calling for Mori’s resignation. A student organised a meeting on social networking app Clubhouse, which led to a Change.org petition that collected more than 140,000 signatures. European embassies in Japan tweeted using #dontbesilent and #genderequality after Mori’s press conference. As domestic and international voices gathered forces on social media, in a way reminiscent of the #MeToo movement, there was no let-up in the backlash. Hundreds of Olympic volunteers, as well as two torchbearers, withdrew in protest. Amidst criticism, Mori resigned on 12 February. After his failed attempt to nominate as his successor an elderly former president of the Japanese soccer association, Seiko Hashimoto—an Olympic medallist and minister for Olympics and gender equality—was finally appointed on 18 February.

Hashimoto began her political career in the 1990s and joined the cabinet for the first time in 2019 as one of only three female ministers. She is also known as the second MP in Japanese history to have given birth to a child during her term, resulting in the legislation of parental leave for MPs. Clearly, the choice would be good PR. What better solution to the problem than choosing a woman to replace Mori, to extinguish the row, and clear up the damage to the image of Japan and the Tokyo Olympics? The Tokyo 2020 Olympics are still scheduled to begin in July 2021 | Photo: Shutterstock

The symbolic significance notwithstanding, Hashimoto is now faced with a mammoth task. Already postponed once due to the pandemic, the Tokyo Olympics is in trouble. Public concern remains high, with surveys showing that the majority of Japanese [70 percent] think the games should be cancelled or delayed again. In only five months, Hashimoto will have to either come up with ways to hold the Olympics safely while the epidemic persists; or decide to cancel the Olympics and handle the aftermath. Either way, it will be difficult work, and she may not be able to escape criticism.

And should she fail, it will be most certainly blamed on her gender. Perhaps not in society at large, but in the closed, patriarchal circle of Japanese politics and sports. As we wish Hashimoto the best of luck in her new role, we should also be aware that she is taking on a huge risk for the sake of the JOC and in exchange giving up her portfolio as a cabinet minister. And in this regard, her appointment, as well as Mori’s remark, can be seen as a sign of Japan’s continuing gendered power structure. News
5femaleAsiaexpertsyoushouldfollow
It's International Women's Day, and the Asia Media Centre is putting the spotlight on five female Asia experts whose work you should be following. More >
by