One could be forgiven for thinking all new hotels around the world had been put on hold due to the pandemic. That is, except, for the Asia-Pacific region.

New Zealand saw two new five-star hotels open during 2020 – the Park Hyatt and The Hotel Britomart, both in Auckland. Park Hyatt, on the water’s edge, is primed for America’s Cup (which begins 6 March 2021) and is perhaps the most sophisticated international-quality new hotel New Zealand has seen for years (except, of course, for the lack of international travellers because of our still-closed borders).

The Hotel Britomart is a five-star hotel of a different type: it has 5 Green Stars from the New Zealand Green Building Council.

Across the Pacific and Asia, many new hotels have opened during the pandemic. Almost 100 new hotels, in fact. AccorHotels in Asia Pacific (a leader in hotel development in the region) says this is the equivalent creation of around 17,000 new rooms, which is only 35 percent lower than the company’s pre-Covid target.

New Zealanders will potentially be able to travel (and return to New Zealand quarantine-free) in 2021, and Asia Pacific is likely to be the first region with travel bubbles installed – Australia and the Cook Islands being first in line, according to the New Zealand Government. All things considered, the Asia-Pacific region has fared better during the pandemic than counterparts in Europe and the US when it has come to containing Covid-19.

When that happens, here are our top five recommendations for hotels in Asia that opened during the pandemic.

Raffles, the famous hospitality institution synonymous with luxury in the East, opened its 32-room Bali outpost in July 2020. Located in Jimbaran, the resort town and fishing village south of Kuta, it offers an intimate experience of Jimbaran Bay and the Indian Ocean by providing guests with a private pool villa per booking. While there are six restaurants (one even in a cave), there’s no need to share any spaces or resources with other guests in your private villa so Raffles Bali can also provide peace-of-mind in a virus-conscious world. Domestic tourism is up and running in Thailand, so Capella Hotels and Resorts group continued its plan to open its first property in the Kingdom in October. There’s 101 rooms (a lucky number for Thais), unobstructed views of the Chao Phraya River, and suites so glorious they would please royalty. Hidden in Japan’s norther Kanto region, the Ritz-Carlton Nikko overlooks Lake Chuzenji and Mount Nantai and offers a showcase of natural Japan. Only 2.5 hours from Tokyo, this new hotel is set amongst Buddhist temples, Shino shrines, and a UNESCO Heritage site. The 94 guest rooms and suites have a graceful Japanese aesthetic but a flare for the modernist, whilst fully allowing you to feel at one with nature.

4. One & Only Degaru Coast, Malaysia

Photo: One & Only Degaru Coast, Malaysia

Nestled on the south-eastern shoreline of Malaysia, this resort sits on more than a kilometre of white sand beaches. A breath-taking hideaway from the world, you’d be forgiven for thinking you were on the set of “Lost" in one of these suites sandwiched by powder sands on one side and lush jungle on the other. Private plunge pools make a great addition for balmy nights. 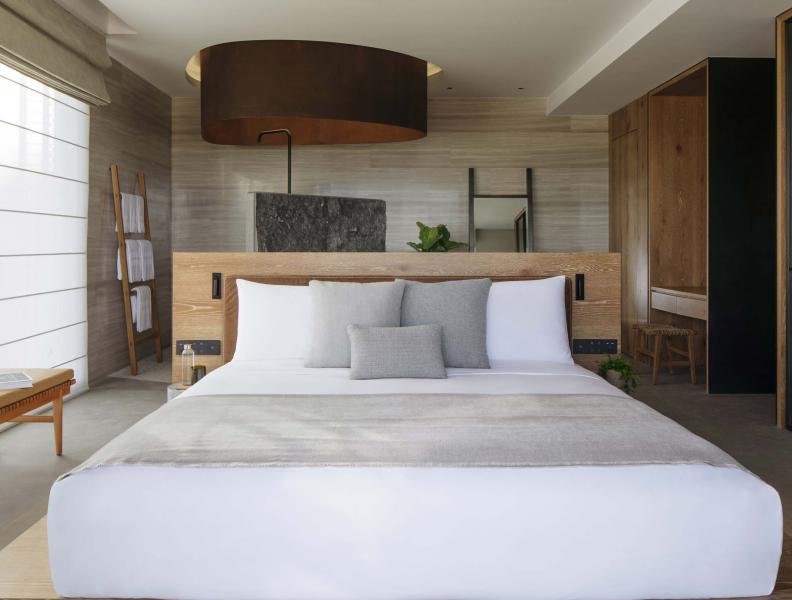 As the sun sparkles off Haitang Bay through each room’s floor-to-ceiling windows at the new 1 Hotel, this place is the definition of sustainable beauty. Designed to keep their environmental footprint small, the interiors are mostly reclaimed cedar and other natural materials such as lava stone and rattan. Located on Hainan Island, one of the main beach destinations in China, there’s an annual mean temperature of 25.8 degrees, making it a perfect destination year-round.